How Rapidly Can COVID-19 Spread In India? Government Did The Math

In the optimistic scenario, symptomatic cases would be about 1.5 million in Delhi, with roughly 500,000 each in Mumbai, Kolkata and Bengaluru. 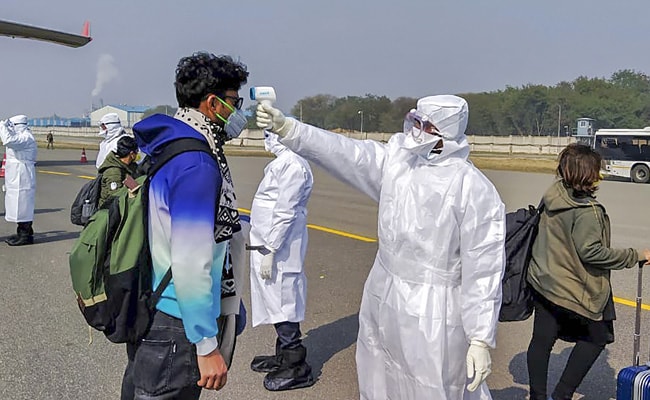 The government says it has screened over 15 lakh people at the airports. (File)

A government projection is out on how coronavirus cases in India can grow rapidly. The report, by the journal of Indian Council of Medical Research, says it "may be possible to interrupt the transmission of Covid-19 in India, but only in the most optimistic scenario".

In the optimistic scenario, symptomatic cases would be about 1.5 million in Delhi, with roughly 500,000 each in Mumbai, Kolkata and Bengaluru. This would peak over a period of 200 days, beginning February, says the report dated February 27.

In the pessimistic scenario, the symptomatic cases would be about 10 million in Delhi, and 4 million in Mumbai. This will peak in just 50 days from February.

But in a hypothetical, optimistic scenario, the peak is really low - about just 200,000 cases in Delhi - that too in about 700 days. This scenario assumes that half of those who show symptoms are quarantined, and that too within three days.

"You have to remember this is purely a mathematical model done about a month back," ICMR's Director General, Balram Bhargav, said in response to NDTV's question.

Much of the report focuses on airports in Delhi, Mumbai, Kolkata and Bengaluru being India's major international travel hubs, and as the virus was initially spread via passengers.

The government says it has screened over 15 lakh people at the airport.

But this report says, quoting one study, that an estimated 46 per cent of infected travelers would not be detected by thermal screening at airports. Another study estimated that travel screening would miss more than half of the infected travellers on account of being asymptomatic, being unaware of exposure, and depending on the incubation period, being asymptomatic or being unaware of exposure.

The government began thermal screening at airports earlier this month, not in February.

So while these major international airports were analyzed as the most likely causes of the spread, the report points out that "no fast-test kits (are) available to identify asymptomatic cases at airports."

But it also says testing all of them in laboratories would be "impractical" because of the increasing number of passengers. And the report only modeled on passenger data from China, not from the rest of the world, where cases exploded after this report was prepared.

The ban on domestic flights today comes in the backdrop of this report and the fact that most of the confirmed cases so far are air travelers or those who got the highly contagious infection from them. The government maintains that the third stage, community transmission, has not begun.