Coronavirus Lockdown: UP Migrant Workers' 900km Journey Back Home From A Quarantine Centre

It is a 903-km journey for these migrant workers - they boarded the bus in Muzaffarnagar in west UP and are going to Gorakhpur in the state's east.

Around 30 kms from Uttar Pradesh's capital Lucknow, a state government bus has stopped for a short break on the highway. This is the second break in 10 hours, the driver and conductor tell NDTV.

Inter-district or inter-state plying of buses has not been permitted even in the third phase of UP's coronavirus lockdown, but this bus is on a special mission - it is taking around 35 migrant workers, who were in a quarantine centre in neighbouring Haryana, home.

It is a 903-km journey for these migrant workers on the Delhi-Lucknow highway - they boarded the bus in Muzaffarnagar in west UP and are going to Gorakhpur in the state's east.

Packets of biscuits lay on empty seats in the bus.

"We did not pay for these," quips Ashok, a mason who worked in Punjab and was stuck in a quarantine centre in Haryana.

"We were given a meal at the bus station and these biscuits and water for the way," he adds.

Ashok and many others from the same village in Maharajganj - a district beyond Gorakhpur and on the border with Nepal are onboard the bus. Most of them worked either in Punjab or in Haryana before being forced to attempt the journey back home because of the coronavirus lockdown. 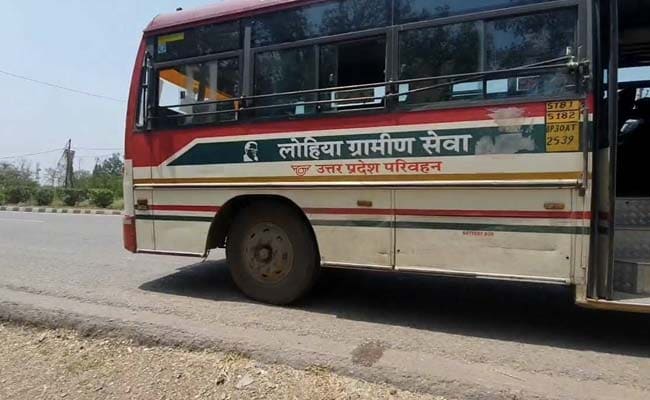 "I started from Punjab on the April 30 evening on a bicycle. But at many places the cops wouldn't let us go on the main road. I remember crossing a small river holding the cycle and a bag over my head. We managed to get to Haryana, there was a nice cop there and he fed us and put us on a bus on the Haryana-UP border," says Ashok.

The UP government says it has brought back over 4 lakh migrant workers in buses from Delhi, Haryana, Rajasthan and Madhya Pradesh ever since the lockdown began in March. Many migrants are still returning in buses; the UP government says depending on their medical check-ups they will either be sent to institutional quarantine in their home districts or advised home quarantine in their villages.

"I have not thought about what to do in the village or when I will go back," says Hariya, an 18-year-old boy seated next to Ashok on the bus.

"No one helped us at our workplace. I once even called the cops there saying we needed food. So we were asked to come to a spot near a temple where some khichdi was given to us, that's it," says Hari Das, another migrant worker on the bus.

The bus moves ahead after the break, it will be another 8 hours before it reaches its destination.