Coronavirus lockdown: A long line of cars and bikes at the Delhi-Gurgaon border

A massive traffic jam blocked the road connecting Delhi and Gurgaon this morning after the Haryana government decided to seal the routes that go to Delhi, concerned over rising cases of the highly infectious coronavirus.

Earlier this morning, hundreds of people who were stopped from crossing the Delhi-Gurgaon border protested on the road after cars were allowed to pass through the barricades unchecked.

The protesters questioned why they were not allowed to move when vehicles were crossing the border freely. A group of people on cycles, mostly workers, then blocked the road for some time. The traffic came to a stop behind them and there's some commotion.

As the crowd started growing in size, some policemen are seen in visuals trying to persuade them to return home.

An hour later, the checkpoint was sealed completely for all, including motorists, except those involved in essential services. 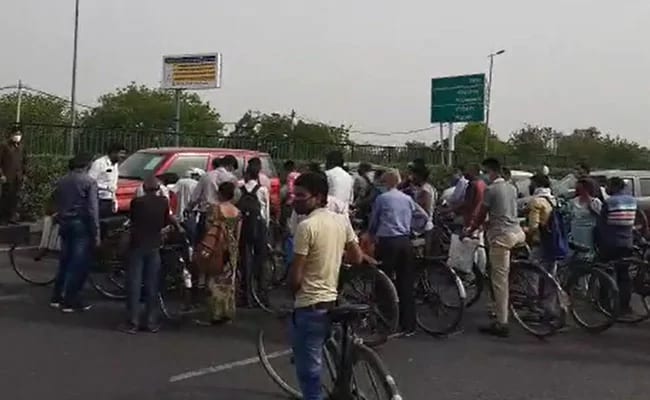 Delhi-Gurgaon border: Workers protest after they were not allowed to cross the border

Coronavirus cases have been increasing in districts sharing a border with the national capital, Haryana Home Minister Anil Vij said on Thursday.

"The main reason behind the spike in cases is the entry of people from Delhi into areas of Haryana which share its border with Delhi," he said.

"In the last one week, Faridabad reported 98 cases, Jhajjar reported six cases, Sonipat 27 and Gurugram 111 cases. Barring those categories for which relaxation has been granted by the high court and the Home Ministry, the inter-state border should be sealed," he added.

Just two weeks ago, the Delhi High Court had to intervene and order Haryana to allow those involved in essential services to travel between the state and Delhi and remove special restrictions on its borders.

The Haryana government gave an undertaking assuring that essential service workers including doctors, nurses, police personnel, those working in courts and municipal agencies will be allowed between Delhi and Haryana if they have e-passes.