After August 5 last year, police had extensively used drones for surveillance to prevent any law and order problem. 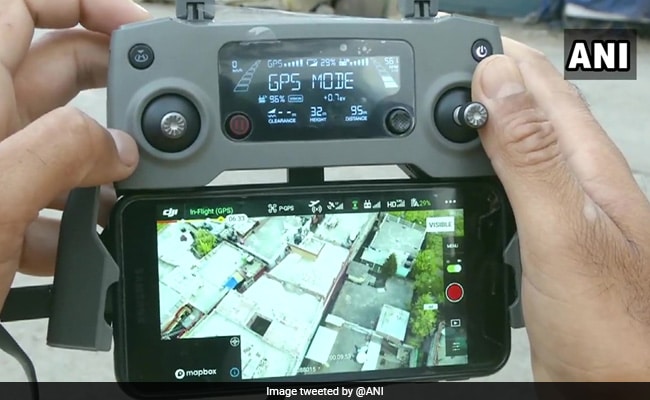 As a drone hovers over a coronavirus "red zone" in Jammu and Kashmir, people walking in the narrow lanes run inside their houses, while those standing outside a ration shop quickly queue up keeping adequate distance between each other.

After August 5 last year, when the special status of J&K was scrapped and the state was divided into two union territories, police had extensively used drones for surveillance to prevent any law and order problem.

Now, as J&K faces the challenge of coronavirus outbreak, these unmanned aerial vehicles (UAVs) have become a vital tool for authorities in enforcing the lockdown to check the spread of the disease, especially in hotspots where multiple cases have been detected.

"We are using scores of high-tech drones to keep vigil and electronic surveillance in most of the red zones across the union territory," a senior police officer told PTI.

Any place that has three or more cases is a red zone.

The intention was to use technology to complement manual surveillance and strictly enforce the lockdown, he said.

Drones have been increasingly used in Srinagar, Jammu, Baramulla, Kupwara, Pulwama, Shopian, Badgam, Rajouri, Udhampur and Kathua districts besides over the highways during the past fortnight.

In videos shared by J&K Police, cops can be seen spreading the message via drones asking people to stay indoors and not come out unless it is necessary.

There have been 380 coronavirus cases and five deaths in Jammu and Kashmir till now, according to Union Home Ministry data.

At least 90 red zones have been declared.

Police said drones allow them to keep an eye on a wider area.

"Especially, in rural areas where people tend to gather in crowds or indulge in group activities, more than in urban areas. Using drones has definitely been a deterrent," an officer said.

Drones can travel up to a distance of one to five kilometres and to a height of 500 metres, depending on the model, from where the operator is controlling the UAV.

"It is proving efficient for surveillance and preventing lockdown violations," he said.

This is not the first time that drones have been used in J&K to help police in surveillance, the officer said, adding, "We have used drones post abrogation of Article 370 in Kashmir".

During the 2014 floods, the Army too used drones in some selective locations in Srinagar to trace and help stranded people during rescue operations.

While enforcing the lockdown in the union territory, police lodged 1,012 FIRs, action was taken against 1,295 shop and vehicle owners and 2,303 people were arrested for violations.

In Kashmir zone, 568 FIRs have been lodged against people for violating government orders and 447 vehicles were seized.

The J&K Police arrested 1,691 people for illegal movement and 1,683 were granted bail after detailed counselling on COVID-19.

As many as 612 persons were arrested for not adhering to government orders, out of which 608 were released after counselling.

In other states too, drones are being used to monitor public gatherings, ensure social distancing, for spraying disinfectants over villages, overseeing cargo, among other tasks.

The drones were also used by China, where the disease was first reported, to detect people with fever in large gatherings using thermal images.