The state government has also tied up with Google to ''Geo-map'' the locations of all these establishments on the Google Maps app for ease of beneficiaries, he said. 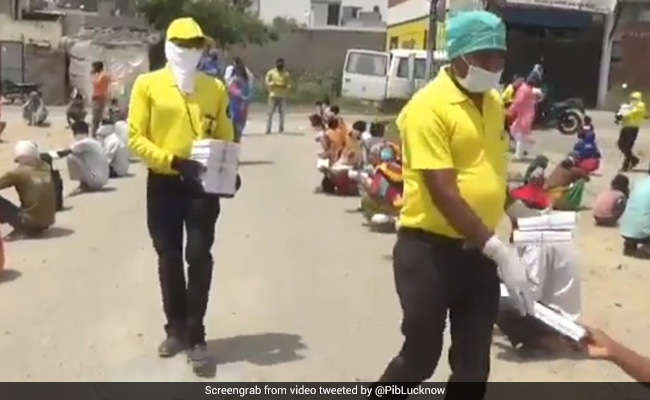 More than 2 crore food packets have been distributed in Uttar Pradesh since March 25.

Uttar Pradesh has become the first state in the country to geotag its 7,368 community kitchens and community shelters across 75 districts which produce 12 lakh food packets a day, a senior official said on Sunday.

The state government has also tied up with Google to ''Geo-map'' the locations of all these establishments on the Google Maps app for ease of beneficiaries, he said.

"The sudden onset of the COVID-19 lockdown in the country threw normal life out of gear but it was the daily wagers and construction labourers who especially bore the brunt," Relief Commissioner Sanjay Goyal said.

The Yogi Adityanath government had anticipated the crisis early on and successfully started establishing community kitchens by mobilising state resources on a massive scale and also reaching out to civil society, religious establishments and non-governmental organisations, he said.

"Establishing community kitchens in adequate numbers in each of the 75 districts was a mammoth task but our respective district magistrates took the challenge head-on," Mr Goyal said.

"The problem was compounded by an influx of migrants who set out for their villages to avoid getting trapped in other states. However, despite the odds, we have managed to start 7,368 community kitchens in all 75 districts. These kitchens are producing 12 lakh food packets every day," he said.

More than two crore food packets have been distributed in Uttar Pradesh since March 25.

Out of these 7,368 community kitchens, 668 are being run by NGOs and religious institutions, he added.

"The concept of relief camps and community kitchens is not new as every year, the DMs work out similar plans in areas affected by yearly droughts/floods. Hence, all our DMs are well-versed in providing relief to the common man," the official said.

The challenge here, however, was how to maintain social distancing and still feed the needy.

"Therefore, we focused on providing food packets at the location itself so that the required social distancing protocol is maintained," Mr Goyal said.

One of the biggest problems that the state faced early on during the lockdown was the lack of information among the general populace regarding the location of shelter homes and community kitchens.

The government recognised the issue and directed the Department of Information Technology to find a solution, he said.

The IT Department, in turn, approached the Remote Sensing Applications Centre (RSAC), Lucknow, for a solution.

The RSAC promptly developed an application by feeding location data as per the latitudes and longitudes of all community kitchens and shelter homes across the state.

"The app is revolutionary in terms that it will help guide the needy to the nearest centre," the official said.

To simplify it further, Google has been roped in to provide geo-location of all such centres through the Google Maps app.

The data regarding all such facilities will go live on Google Maps in the next couple of days, he added.