The MLA, Amarinder Raja Warring, showed up with a contingent of Congress workers to "see off" the migrants heading to Bihar's Muzaffarpur and ensure they knew who their "benefactor" was. 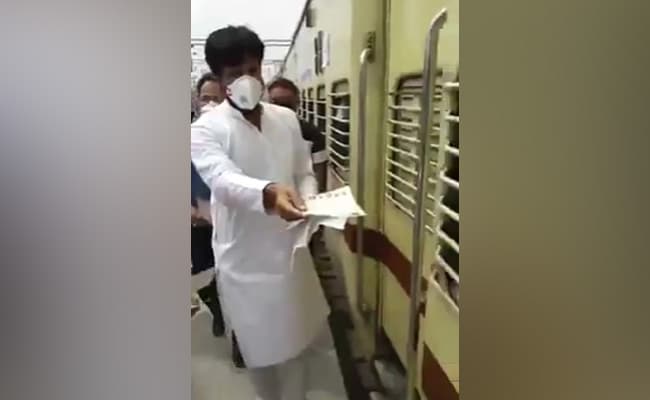 The leaflet is titled, roughly translated: "Congress comes through in your hour of need"

As a special train with migrants was rolling out of a station on Sunday in Congress-ruled Punjab, each passenger was handed a pamphlet. "Your ticket was paid for by Sonia Gandhi," said the flyers distributed at Bhatinda station by a Congress MLA.

The MLA, Amarinder Raja Warring, showed up with a contingent of Congress workers to "see off" the migrants heading to Bihar's Muzaffarpur and ensure they knew who their "benefactor" was.

Mr Warring also made a speech at the railway station before the train left, attempting to draw political capital from a move Congress president Sonia Gandhi had announced last week to help "every needy worker and migrant".

"Your ticket fare has been paid by Congress president Sonia Gandhi. Congress party, Punjab Chief Minister Amarinder Singh, (state Congress chief) Sunil Jakhar are sending you. Everything is written in this pamphlet, you can read it at leisure on your journey," the Congress legislator said. The leaflet is titled, roughly translated: "Congress comes through in your hour of need".

In visuals, the MLA from Gidderbaha is seen handing pamphlets to passengers seated on the train through windows.

This is the first time that any political leader has showed up at a station for this sort of campaign.

While announcing that the Congress would pay the fare for migrants, Mrs Gandhi had called it "disturbing" that the migrants stranded by the coronavirus lockdown were being asked to pay for their tickets home.

The centre clarified later that the Railways Ministry was subsidizing 85 per cent of the fare and states could pay the rest.

The state of migrants left without jobs, food or shelter by the nationwide lockdown has fueled a political row with the opposition accusing the government of neglecting them. Amid daily reports of migrants starting for their home states on foot -- many of them dying of hunger, exhaustion or accidents on the highway - the centre allowed special trains for them.