Covid-19 Lockdown: According to the new system, only a few farmers are allowed at a given time in the grain markets where the wheat is kept in heaps of 50 quintals each. 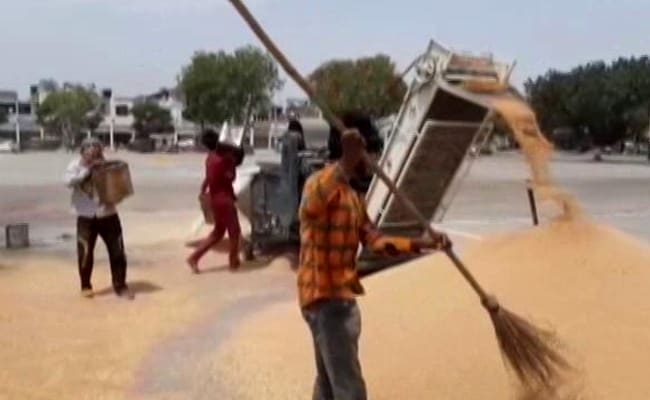 Coronavirus lockdown: Punjab government began the process of the sale of wheat harvest on April 15.

Ten days ago, as the process of wheat procurement began in Punjab on April 15, the state government decided to introduce a token system to stagger the process amid a nationwide lockdown to check the spread of highly infectious coronavirus or COVID-19. Farmers and commission agents, however, are not too pleased with the new rules.

According to the new system, only a few farmers are allowed at a given time in the grain markets where the wheat is kept in heaps of 50 quintals each. All commission agents are issued one pass for one trolley of wheat; the passes are issued three days in advance.

Across the state, there are now 4,000 purchasing centres, double than that of last year.

While the state government claims that the wheat procured in the last one week is double of the quantity that was procured the previous year, however, the farmers are not too pleased with the new restrictions.

According to Leela Singh from Mansa district, a small-scale farmer - who has to run several errands for the sowing of the next crop - now has to make multiple trips to the mandis, as per the new rules.

"They are also compelled to bear the whims and fancies of the commission agents who usually prefer giving tokens to large landholders," he says.

The commission agents say the new process has created hurdles. Ravi Dhir, an agent, says that passes are issued for a particular day. For the rest of the days - when the wheat procurement process is on - one has to sit idle and even the labourers don't have much to do.

The state government, however, says the new rules have made the process "smooth". "Procurement is going on smoothly, rapidly. The farmers, agents are happy," Bharat Bhushan Ashu, Food and Civil Supplies Minister of Punjab, told NDTV.

The biggest challenge, however, is for those farmers- who are not as tech-savvy - to adapt to the changes.