Coronavirus Cases Doubling Every 4 Days, May Touch 17,000 In A Week

India has registered 4,421 cases of COVID-19 including 114 deaths since the outbreak began earlier this year.

If the current growth rate of coronavirus cases continues, India will have over 17,000 patients by the time ongoing nationwide lockdown ends on April 14, data showed on Monday.

India has registered 4,421 cases of COVID-19 including 114 deaths since the outbreak began earlier this year.

The rate at which coronavirus cases double in the country has risen in the past eight days - from six to four days now.

According to the data released by the Health Ministry, while the number of cases doubled every 5 days from March 15 to 20, they sped up to 3 days between March 20 and 23.

And while the growth rate briefly slowed down from March 23 to 29, with cases doubling every six days, since March 29 to April 6, the number of cases doubled every four days. 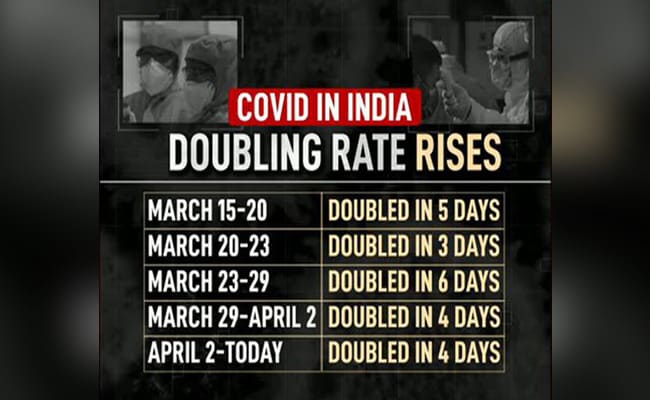 The rate at which coronavirus cases have doubled since March 15.

On Sunday, the government acknowledged the rising numbers but said that without the cases linked to last month's religious congregation in Delhi's Nizamuddin, the doubling rate would have been much slower at 7.4 days.

In their daily briefing on Monday, government officials announced fresh figures to show that the people linked to the Islamic missionary group Tablighi Jamaat account for more than one-third of the total tally.

Cautioning people to be ready for a "long fight" against COVID-19, Prime Minister Narendra Modi on Monday told his ministers to make plans for slowly exiting the ongoing lockdown and to contain the economic impact of the deadly virus pandemic, including by reducing dependence on other countries.

The Union Health Ministry said the disease is in "localised community transmission" stage with a large number of cases being found in some particular areas that indicated that some areas including in Uttar Pradesh may not see full exit from the lockdown.

Experts said that the lockdown, in its 13th day on Monday, has helped in slowing down the spread of the virus, but called for an exponential ramping up of the testing mechanism and upgrading of healthcare facilities.

The Indian Council of Medical Research, which has so far conducted around 90,000 coronavirus tests, said orders have been placed for 5 lakh rapid antibody testing kits.

Civilian Killed During Anti-Terror Operation In Jammu And Kashmir's Kulgam