The COVID-19 test kits were sold to the government at an inflated price by the Indian distributor, Real Metabolics, it has emerged from a legal dispute between the distributor and the importer that went to the Delhi High Court.

The test kits were bought by the importer, Matrix, for Rs 245 apiece from China (File)

India was asked to pay double the rate for Chinese Rapid Antibody Tests for coronavirus, which have been put on hold in many states because of faulty results.

The government today cancelled the order for COVID-19 test kits which were being sold at an inflated price by the Indian distributor, Real Metabolics. Details of the marked up price emerged from a legal dispute between the distributor and the importer that went to the Delhi High Court. 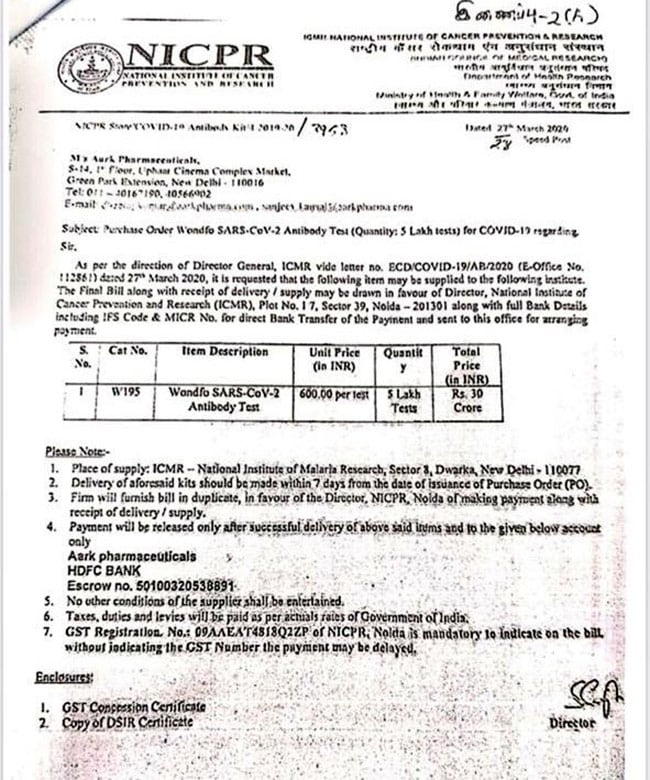 On April 16, the Indian Ambassador to China, Vikram Misri, tweeted that 650,000 kits, including Rapid Antibody Tests and RNA Extraction Kits had been despatched to India.

#IndiaFightsCoronavirus A total of 650,000 kits, including Rapid Antibody Tests and RNA Extraction Kits have been despatched early today from Guangzhou Airport to #India | #2019nCoV#StayHomeSaveLives@MEAIndia@HarshShringla@DrSJaishankar

The test kits were bought by the importer, Matrix, for Rs 245 apiece from China. Yet, the distributors, Real Metabolics and Aark Pharmaceuticals, asked the government for Rs 600 for each kit, which means a 140 per cent mark-up.

Trouble started when the Tamil Nadu government also procured the Chinese kits at Rs 600 apiece from the same importer, Matrix, through another distributor Shan Biotech. NDTV has accessed the purchase order signed between Tamil Nadu and Shan Biotech. 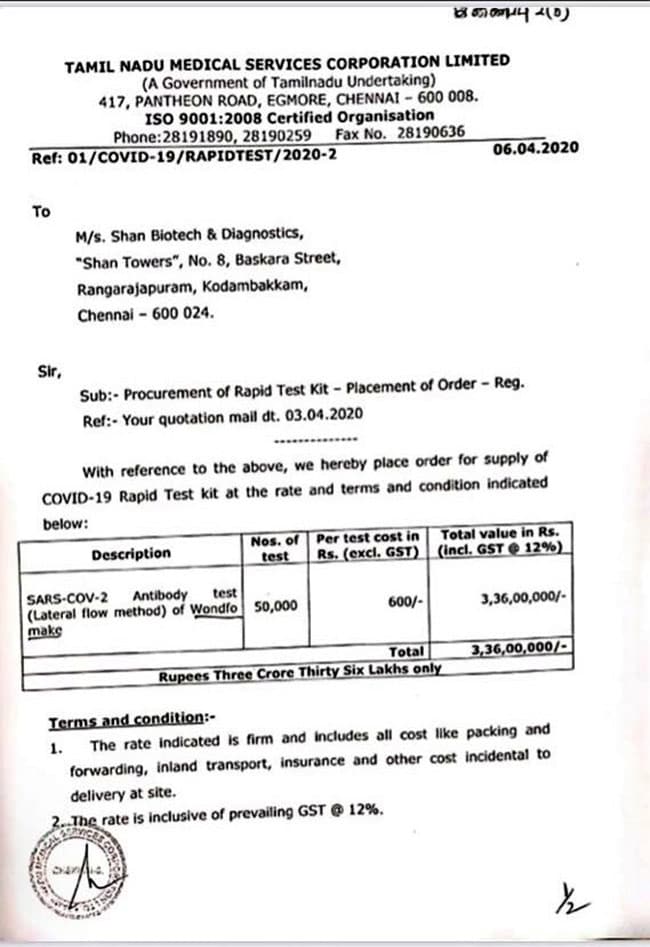 Real Metabolics then went to the High Court claiming to be the exclusive distributor for the kits imported by Matrix and accusing it of engaging another distributor (Shan Biotech) for Tamil Nadu in violation of the agreement.

The court, while hearing the dispute, found that the mark-up was "on the higher side" and directed that the price of the kits be reduced to Rs 400 per kit.

"The economy is virtually at a standstill for the last one month. There is an element of disquiet apropos one's safety. For people to be assured that the pandemic is under control and for governments to ensure and for agencies engaged in the frontline battle to safeguard people's health, more kits/tests should be made available urgently at the lowest cost, for carrying out extensive tests throughout the country. Public interest must outweigh private gain. The lis (dispute) between the parties should give way to the larger public good. In view of the above, the kits/test should be sold at a price not beyond Rs. 400/ inclusive of GST," said the High Court.

To NDTV's question on why the kits were overpriced, ICMR's response was that the range approved was Rs 528 to 795 for the Rapid Test kit. "The price depends on the technical specification of kits such as sensitivity, specificity, etc., rate received in tender, supply capacity," said the council.

Last week, ICMR had halted the use of the Wondfo test kits after several states complained.

The test kits have been found to be "under-performing", the government said today, asking states and hospitals to stop using the kits. Since "due process was followed (not paying 100% advance before receiving the order), the government does not stand to lose a single rupee", an official statement said.

Three states refused to use the kits, complaining about errors. Rajasthan said only 5.4 per cent of the tests had proved effective. ICMR then asked states to hold off the use of the Rapid Testing Kits for two days.