The Prime Minister's Citizen Assistance and Relief in Emergency Situations or PM-CARES Fund will go a long way in creating a healthier India, PM Modi had said on Twitter. 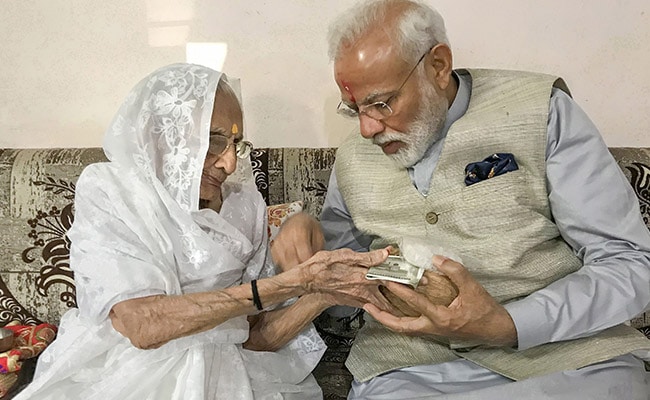 Prime Minister Narendra Modi's mother Heera Ben has donated Rs 25,000 from her savings to the new fund set up to tackle the coronavirus crisis, government sources said on Tuesday.

Heeraben, 98, lives in Raisin village near Gandhinagar in Gujarat, with her younger son Pankaj Modi.

She had expressed her support for PM Modi's Janata Curfew initiative earlier this month by clanging a plate as a symbol of gratitude to those providing essential services.

She was also seen standing in a bank queue in 2016 after PM Modi announced demonetisation, the move to scrap large currency notes.

PM Modi had announced the creation of an assistance and emergency situation relief fund where people can contribute and help in the government's fight against coronavirus on Saturday.

The Prime Minister's Citizen Assistance and Relief in Emergency Situations or PM-CARES Fund will go a long way in creating a healthier India, he said on Twitter.

A statement posted on his official website said while the Prime Minister is the chairman of the new public charitable trust, its members include the Defence Minister Rajnath Singh, Home Minister Amit Shah and the Finance Minister Nirmala Sitaraman.

Opposition parties, however, have questioned the formation of the charitable trust when the government already runs the Prime Minister's National Relief Fund (PMNRF) that has Rs 3,800 crore lying unused.

"Why not simply rename PMNRF as PM-CARES, given the PM's penchant for catchy acronyms, instead of creating a separate public charitable trust whose rules and expenditure are totally opaque," Congress leader Shashi Tharoor asked.