Melania Trump tweeted, "Thank you President @Rashtrapatibhvn and First Lady Savita Kovind for the warm welcome to the Presidential Palace" 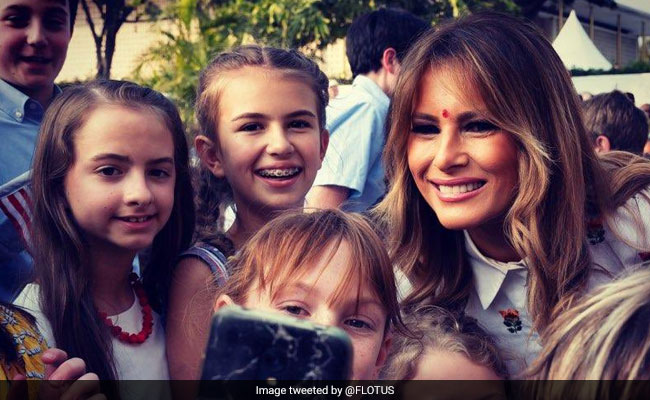 US First Lady Melania Trump has posted a series of tweets thanking President Ram Nath Kovind, Prime Minister Narendra Modi and others for the warm reception she received in India.

"Thank you President @Rashtrapatibhvn and First Lady Savita Kovind for the warm welcome to the Presidential Palace. It was a beautiful day celebrating the friendship between our two nations Flag of IndiaFlag of United States," Melania Trump tweeted.

In another tweet tagging her husband and US President Donald Trump and PM Modi, the First Lady said, "Thank you @narendramodi for welcoming me and @POTUS to your beautiful country. We were delighted to receive such a warm welcome from you and the people of India!"

Thank you @narendramodi for welcoming me and @POTUS to your beautiful country. We were delighted to receive such a warm welcome from you and the people of India! pic.twitter.com/lWyndlcpI7

Before leaving for the US, the Trumps had visited the memorial to Mahatma Gandhi in Delhi. "It was an honor to lay a wreath at the beautiful Raj Ghat Memorial & plant a tree to remember the life & legacy of Mahatma Gandhi," Melania Trump tweeted.

She also thanked Delhi government school teacher Manu Gulati, who guided her during a tour of a school to attend a "happiness class". Launched in July 2018, the Arvind Kejriwal government's brainchild "happiness class" is a 45-minute break during which an activity-based curriculum is followed, such as meditation and mental exercises.

"Thank you - Loved meeting you all! Continue to #BeBest," Melania Trump replied to Ms Gulati, who had tweeted, "Dear @FLOTUS. Our children's excitement at having you in our school continues even after you have returned home. Thank you for giving @HappinessDelhi such a great shot in the arm! We all simply adore you! #BeBest"

Melania Trump's last tweet was to the employees at the US embassy in India. "It was great meeting the US Embassy staff @USAndIndia and their families in #India. @POTUS and I are thankful for your commitment to representing the #USA Flag of IndiaFlag of United States," she said.

The Trumps were in India for two days last week. They landed in Ahmedabad in Gujarat, PM Modi's home state, from where they went to see the Taj Mahal in Agra. The next day President Trump and PM Modi held talks on trade and defence, with both nations signing deals.

President Trump, however, said India's tariffs on US products were high and a major trade deal would come later after negotiations.