Shashi Tharoor submitted his papers to the party's central election authority chairman Madhusudan Mistry at his office at the AICC headquarters. 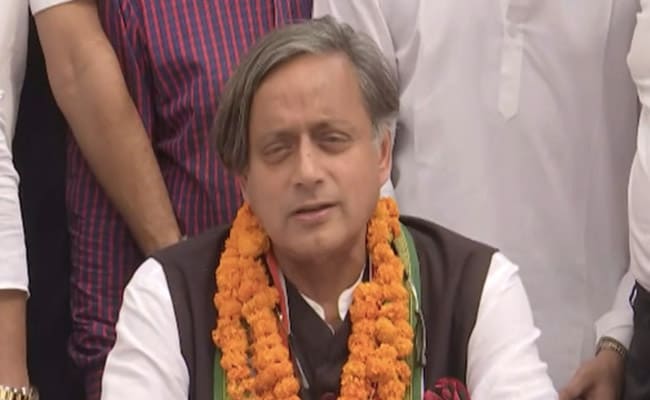 Senior Congress leader Shashi Tharoor on Friday filed his nomination for the post of Congress president at the party headquarters in New Delhi.

The Thiruvananthapuram MP submitted his papers to the party's central election authority chairman Madhusudan Mistry at his office at the AICC headquarters.

Amid the sound of drumbeats and fanfare, he made an entry at the AICC headquarters.

Here are the Highlights on Congress Presidential Polls:

Get NDTV UpdatesTurn on notifications to receive alerts as this story develops.
Sep 30, 2022 16:24 (IST)
"Not The Candidate Of G-23": Shashi Tharoor Clarifies

Shashi Tharoor asserted that he is not the G-23 candidate for the election, the party's first in over 20 years. "I need the backing of 9,100 people, not 23. I am not the candidate of the G-23. It is a myth, there is no such thing," he said
Sep 30, 2022 16:22 (IST)
Shashi Tharoor On Gandhis' Support
Shashi Tharoor said he has met all the three Gandhis and that they have assured him that the contest will strengthen the party. Outlining his vision, he said he aims to rejuvenate the party, reimagine the leadership, reiterate the core ideology, broaden participation, focus on youth, and return to an ethos of politics of social work.
Sep 30, 2022 16:21 (IST)
"Will Change High Command Culture": Shashi Tharoor After Filing Nomination
The answer to chaos within the Congress is decentralisation, Shashi Tharoor said right after filing his nomination today for Party President today. Speaking to reporters, he explained his vision for the Congress as head of the party. "I will change the party high command culture," he said.

Identifying the practice of "constantly referring things up to Delhi" as a problem, he said the party cannot have someone passing resolutions in one sentence saying that the Congress President will decide.
Sep 30, 2022 16:17 (IST)
Gandhis Show Old Habits Die Hard
A day after announcing that he will run for Congress President, Digvijaya Singh today announced that he's dropping out. That decision is based on Mallikarjun Kharge being put forward as the candidate backed by the Gandhis.
"Kharge ji is my leader and my senior. I asked him yesterday if he wanted to contest. He said no. I met him again today. I told him I am with you fully if you are contesting. I can't think of contesting against him. He is filing his nomination and I will be his proposer," said Digvijaya Singh, 75.
Sep 30, 2022 14:54 (IST)
Manish Tewari Extends Support To Mallikarjun Kharge
Congress leader Manish Tewari, who is a part of the G-23 grouping, on Friday extended support to Mallikarjun Kharge in the party's presidential polls against his primary challenger Shashi Tharoor.
"Mallikarjun Kharge is a senior leader of the Congress party. I and Anand Sharma have come to support his nomination here," said Mr Tewari, as quoted by news agency ANI, after reaching the All India Congress Committee (AICC) office in the national capital.
Both Mr Tewari and Mr Tharoor belong to the G-23 grouping of senior leaders within the party. Reports had suggested Tewari was himself thinking of contesting.
"We have come in support of his (Kharge's) nomination. Shashi Tharoor was, is and will be our friend. Those who have spent their entire lives in Congress are here. Digvijaya Singh has shown grace and withdrawn his candidature. It would be good if there is a consensus," Mr Tewari added.
Sep 30, 2022 14:42 (IST)

#JustIn | "I am thankful to everyone who came here with me": Mallikarjun Kharge (@kharge) after filing nomination for Congress President pic.twitter.com/4PVk1Gl9DI

#CongressPresidentPolls | "He is the Bhishma Pitamah of our party in some ways. But there is no disrespect in saying I have my own ideas to put forward, which may not be his ideas...let the party workers decide how to proceed": @ShashiTharoor on contesting Mallikarjun Kharge pic.twitter.com/vXdzVXLIIW

Sep 30, 2022 14:31 (IST)
Mallikarjun Kharge Files Nomination
Senior Congress leader Mallikarjun Kharge on Friday filed his nomination for the post of party president.
His candidature was proposed by party leaders Ashok Gehlot, Digvijaya Singh,  Pramod Tiwari, PL Punia, AK Antony, Pawan Kumar Bansal and Mukul Wasnik.
G23 leaders Anand Sharma and Manish Tewari are also proposers for Mr Kharge's candidature.
Sep 30, 2022 14:17 (IST)
Sachin Pilot's Supporters Raise Slogans Outside Congress Office As Ashok Gehlot Arrives
Amid a protracted crisis in the Congress, the supporters of Sachin Pilot gathered at the AICC office in the national capital Friday and demanded that he be elected as the party president or be made the chief minister of Rajasthan.
As soon as Rajasthan Chief Minister Ashok Gehlot arrived at the All India Congress Committee (AICC) office, the supporters began raising slogans in favour of Mr Pilot.
"We want to see Sachin Pilot as the chief minister of Rajasthan or as the national president of Congress," said a supporter of Mr Pilot, as quoted by news agency ANI.
"Rahul Gandhi is also young; the future of India is in the hands of the youth. Till the youth is not given a top post, Congress will not get power. Pilot knows about problems at the ground level and what the party workers go through. We demand he be made the party president," he added, as quoted by news agency ANI.
Sep 30, 2022 14:15 (IST)

#CongressPresidentPolls | "I will not let down the workers from around the country who've gone out of their ways to extend their support to me": Senior Congress leader @ShashiTharoor when asked whether he would withdraw from the elections and Mallikarjun Kharge's nomination pic.twitter.com/yrcGY3Y9fJ

#CongressPresidentPolls | "Congress should be the party to bring the change": Senior Congress leader @ShashiTharoor after filing nomination papers as a candidate for the party's top post pic.twitter.com/LtbsInk1bA

#CongressPresidentPolls | "Today, the nomination papers I have submitted reflect the extraordinarily wide range of support that has been extended voluntarily to me by our party workers across the country": Senior Congress leader @ShashiTharoorpic.twitter.com/txd4INzR4V

#JustIn | "Today, the nomination papers I have submitted reflect the wide range of support that has been extended voluntarily to me by our party workers across the country": @ShashiTharoor after filing nomination for Congress President pic.twitter.com/fBOXuGNs2b

Sep 30, 2022 13:42 (IST)
Shashi Tharoor To NDTV: Gandhis Are "A Part Of Congress' DNA" But...
Shashi Tharoor, one of the two candidates for the October 17 Congress president election, revealed today that Sonia Gandhi told him "you are most welcome to contest" and that there would be no "official candidate" as her family would stay neutral.
Mr Tharoor said when he met with Sonia Gandhi to inform her about wanting to contest, she didn't try to dissuade him at all.
"If she might have said why do you want to contest, we always do things by consensus, leave it to us, we will find the right person...But there was nothing of that sort. On the contrary, she said exactly the opposite. She said 'we believe the elections are good for the party. If you want to contest, you are most welcome'," Mr Tharoor told NDTV.
Sep 30, 2022 13:34 (IST)

I have just submitted my nomination papers as a candidate for the presidential election of @incindia. It is a privilege to serve the only party in India with an open democratic process to choose its leader. Greatly appreciate Soniaji's guidance&vision.#ThinkTomorrowThinkTharoorpic.twitter.com/4HM4Xq3XIO

#NDTVExclusive | "I was encouraged by friends and colleagues": @ShashiTharoor on running for Congress top job#TharoorToNDTVpic.twitter.com/QxYqcCmCks

Sep 30, 2022 12:10 (IST)
"Time To Close Ranks": Manish Tewari, G-23 Member, Says Won't Contest
Manish Tewari, senior Congress leader and part of the 'G-23' group of dissenters, today bowed out from the contest for the President of the grand old party following speculation that he would be the second candidate from the camp after Shashi Tharoor to throw their hat in the ring.
Speaking to NDTV, he said he doesn't want to become the 'fall guy'.
He also tweeted his decision to opt out. Given recent "unfortunate events", it's time to close ranks and strengthen the party, he said on Twitter, suggesting there would be no more additions from the G-23 to the already chaotic contest.
"Leadership, Ideological clarity, narrative & transparent access to resources are pillars of 'A' political party
Sep 30, 2022 11:50 (IST)

Pleased to announce that I will be filing my nomination papers at @INCIndia HQ, 24 Akbar Rd, at 12.15 today & holding a press conference at my residence, 97 Lodhi Estate, at 1 pm. These will both be live on my social media handles.

Paid tribute to the man who built India's bridge to the 21st century this morning.

"India is an Old country but a young nation... I dream of India Strong, Independent, Self-Reliant and in the front rank of the nations of the world, in the service of mankind."

Congress MP Shashi Tharoor reaches Raj Ghat in Delhi, ahead of filing his nomination for the post of Congress President at noon today

He says, "When you enter a race, you know that the outcome is uncertain but you go with confidence that you'll give a good account of yourself." pic.twitter.com/bqRSOExEjV

#CongressPresidentPolls | "It is going to be a friendly contest. We just want the party to be strong": Congress MP @ShashiTharoorpic.twitter.com/wEPxEuQmzz

Sep 30, 2022 09:29 (IST)
Digvijaya Singh At Mallikarjun Kharge's Residence
Digvijaya Singh, Congress president contender, visits Mallikarjun Kharge who has joined contest as party's "official" choice
Sep 30, 2022 08:52 (IST)
Priyanka Gandhi Vadra Has Active Role In Congress Internal Polls: Sources
The Congress election to choose a new president is the first in more than 20 years where no one from the Gandhi family is in the running. But apparently, they have not been entirely hands-off.
Sources say Priyanka Gandhi Vadra, contrary to public perception, is taking an active interest in the election.
Rahul Gandhi, who stepped down from the top post after the party's crushing defeat in two consecutive general elections, has refused to contest, making the election necessary. Sources said he was also insistent that his mother and sister stay away from the party polls.
Sep 30, 2022 08:49 (IST)