Congress Made Money Instead Of Improving Medical Infrastructure: Amit Shah

Amit Shah in Gujarat: Amit Shah is on a two-day visit to Gujarat, where elections are due in December this year, which began on Monday. 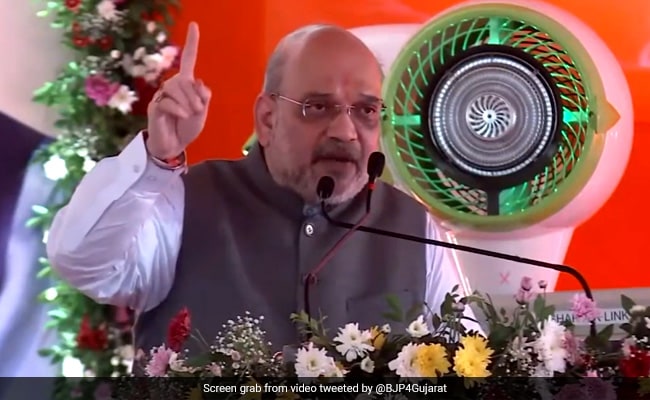 Amit Shah was addressing a gathering in Kalol town in Gandhinagar district.

Union Home Minister Amit Shah today alleged instead of improving health infrastructure, Congress leaders "made money" in the name of improving medical education facilities when the party was in power before 2014.

"Under the Ayushman Bharat or PM-JAY scheme, 60 crore poor citizens are now getting free treatment up to Rs 5 lakh. In addition, PM Modi has also allocated Rs 64,000 crore to set up the required health infrastructure to implement that scheme. 35,000 new beds were added in hospitals across 600 districts under this scheme," he said.

He added that a separate budget of Rs 1,600 crore has been granted to set up integrated laboratories and research centres in the country.

Amit Shah is on a two-day visit to Gujarat, where elections are due in December this year, which began on Monday.

"What is the meaning of such infrastructure if there are no doctors in hospitals? During the Congress rule, leaders were busy making money in the name of improving medical education facilities. It was PM Modi who improved this scenario after assuming the office," the Gandhinagar MP said.

Mr Shah said 387 medical colleges, both private and government ones, were functioning in the country in 2013-14. Their number has increased to 600 due to the efforts of the prime minister.

"The number of MBBS seats has also gone up to 89,875 today against 51,348 seats in 2013-14. The number of post-graduate medical seats also increased from 31,185 to 60,202 today. This means that the number of colleges and medical seats doubled in the last eight years. Ten new AIIMS (All India Institute of Medical Sciences) have become operational, while 22 more are coming up," said Mr Shah.

The home minister is scheduled to inaugurate and lay the foundation stones of various projects in areas falling under his Gandhinagar Lok Sabha constituency.

He will inaugurate an underpass in sector 15 of Gandhinagar city and also attend the ground-breaking ceremony for a Gujarat Technological University building in Lekavada village in the district.

In the evening, Mr Shah will visit his native place Mansa town in Gandhinagar to take part in the 'aarti' at Bahuchar Mata temple on the second day of Navratri.