Gujarat polls: Even the last rites of the country's first deputy prime minister were performed in "unceremonious" way, Amit Shah said at an election rally at Khambhat in Gujarat's Anand district. 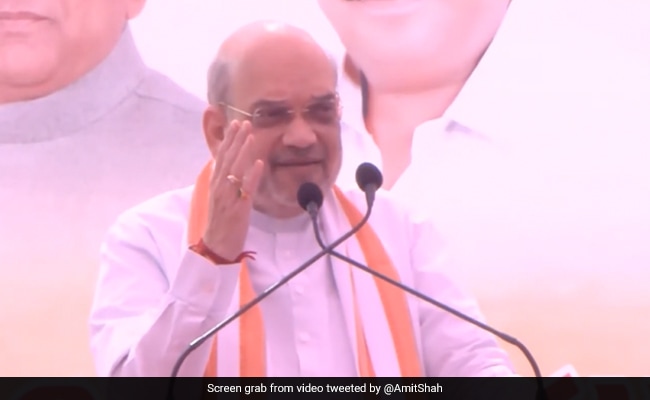 Amit Shah said that no Congress leader dares to visit the Statue of Unity.

Union Home Minister Amit Shah on Tuesday alleged that the Congress did everything possible to "insult" Sardar Vallabhbhai Patel and it has started praising him only now in view of the Gujarat Assembly elections.

Even the last rites of the country's first deputy prime minister were performed in "unceremonious" way, the BJP leader said at an election rally at Khambhat in Gujarat's Anand district.

"I am surprised that the Congress now praises Sardar Patel. Since my childhood, I have never heard any Congress leader talking about Patel. Instead, they left no stone unturned to insult Patel, right from performing his last rites in an unceremonious manner to ensuring that no monument was built in his memory," Mr Shah said.

Voting for Khambhat and 92 other seats will take place on December 5, in the second phase of the Assembly elections.

Mr Shah further said that it was Prime Minister Narendra Modi who paid a real tribute to Patel by constructing the Statue of Unity, Patel's statue which is the world's tallest monument.

He also dared Congress candidate from Khambhat, Chirag Patel to produce any photograph where he is seen paying tributes to Sardar Patel at the Statue of Unity.

No Congress leader dares to visit the Statue of Unity at Kevadia for fear of losing ticket, he claimed.

He also accused the Congress of opposing the construction of the Ram temple at Ayodhya and the Triple Talaq prohibition law for its votebank politics.

"If they support such causes, they fear they will lose those votes. I hope you understand which votes I am talking about. But their time is now over and PM Modi's time has started. Rahul Baba (Gandhi), book a ticket to Ayodhya because a grand temple is going to be inaugurated on January 1, 2024," said Mr Shah.