"The first thing Narendra Modi ji did when he became PM was trying to kill this Land Acquisition Bill. We fought him in Parliament and stopped him from killing it," Rahul Gandhi said. 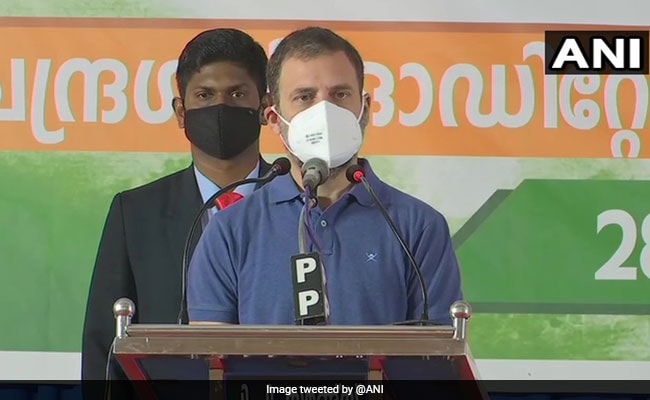 Congress leader Rahul Gandhi on Thursday alleged Prime Minister Narendra Modi of trying to "kill" the Land Acquisition Bill brought by his party for the farmers.

"Some years ago I noticed there was an attempt to attack India's farmers. It started in Bhatta Parsaul when their land was just being taken away. I realised it was a problem and started a conversation inside the Congress party. The result was that we threw out the old British Bill and brought out a brand new Land Acquisition Bill that guaranteed compensation and protection to our farmers. The first thing Narendra Modi ji did when he became PM was trying to kill this Bill. We fought him in Parliament and stopped him from killing it," he said while addressing a rally at Wayanad.

The Wayanad MP also said the Prime Minister asked the chief ministers of the Bharatiya Janata Party (BJP)-ruled states to ''kill them'' as he could not defeat them in the parliament.

The Congress leader arrived in Kerala on Wednesday for the two-day visit ahead of the Assembly elections in the state scheduled for April-May.

He inaugurated the new building and gate of Vandoor government girls higher secondary school and motivated the students to thrive and survive on their own. He also said girls have to work harder than boys as it is the nature of society that it does not want to let them become independent.

Earlier last week, he was on a three-day visit to the western belt in Tamil Nadu where he interacted with farmers, business people, weavers and the general public.

During his visit, the politician said the major economic policies of the present central government like Goods and Services Tax and demonetisation destroyed micro, small and medium enterprises (MSME) in the country.