"Congress Didn't Give Me Any Work In Gujarat Local Polls": Hardik Patel

Hardik Patel dismissed speculation about leaving the Congress in the future and said he would remain in the party and carry out whatever responsibility he is given. 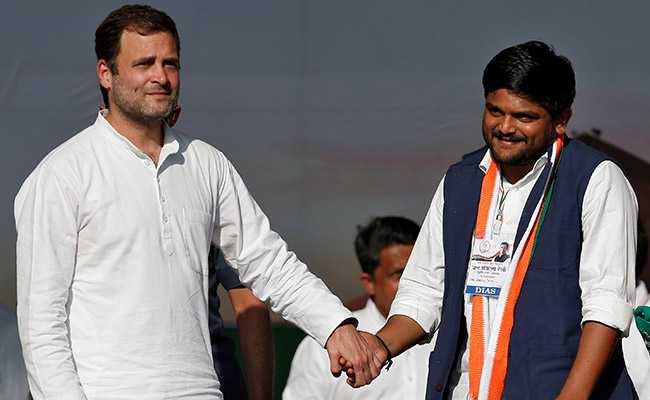 Gujarat Congress working president Hardik Patel on Sunday slammed the functioning of the state unit after the party's humiliating defeat in the local body elections, claiming that no work was given to him in the polls and his opinion was also not sought for ticket distribution.

He, however, also dismissed speculation about leaving the Congress in the future and said he would remain in the party and carry out whatever responsibility he is given.

In an interview with PTI, Mr Patel also raised questions over the understanding of the party's central leadership of Gujarat and said the Congress has failed to struggle as an opposition in the state.

In order to strengthen the party, the high command has to understand Gujarat, he said.

Mr Patel also argued that the legislators have to be kept away from the work of the organisation.

The comments by Mr Patel, who was the face of the Patidar quota agitation in 2015, came days after the BJP won all 31 district panchayats, 74 out of 81 municipalities and also trounced its main rival Congress in 231 taluka panchayats.

The success followed the BJP's clean sweep in elections for six municipal corporations in the first phase last month. The Congress could not even open its account in the Surat Municipal Corporation.

When asked about the reasons for the party's defeat, Mr Patel said, "We have failed to win the public's trust. The struggle which we should have undertaken as an opposition, we have failed in that. The public feels that the Congress did not do its job as an opposition and that is why the Aam Aadmi Party got votes in many places."

"In Surat, people from our movement had asked for only two tickets. The party did not even give that. Just because of those two seats we lost all the 36 seats there," he said.

It is worth noting that in the last civic elections, the Congress had won more than 30 seats in the Patidar-dominated areas of Surat.

"Preparations for the local body elections had been going on for three months. Not even once in three months have I been told that you have to do this work. Tickets were distributed in more than 5,000 seats, but not even for one seat, I was asked to give my opinion. Even in Patidar-dominated areas, my opinion was not taken," he said.

"Now everyone has to work hard," he added.

Asked if the Congress high command did not take necessary steps in time, Mr Patel said they have to understand Gujarat, and give importance to it.

"We have not been in power in the state for 30 years. If we do not understand Gujarat, young workers like us will be left disappointed. The party is slumping day by day and no one is paying attention," Mr Patel said.