It was Rahul Gandhi's second visit to the shrine. He had last visited the temple in 2010. 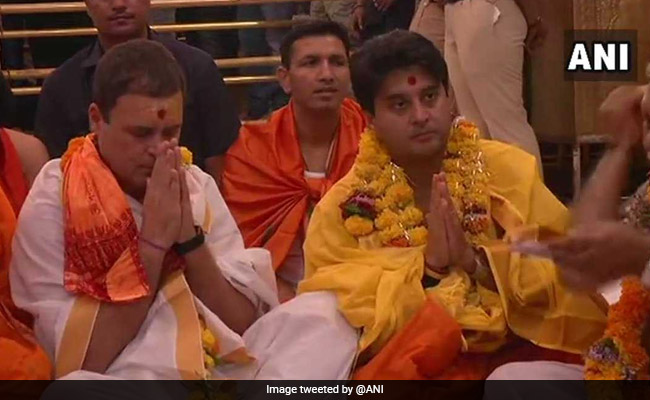 Rahul Gandhi performed the puja of Lord Shiva for around 30 minutes.

Clad in a 'dhoti', he performed 'puja' at the ancient temple, which is one of the 12 'Jyotirlingas' (special shrines dedicated to Lord Shiva) in the country.

It was Mr Gandhi's second visit to the shrine. He had last visited the temple in 2010, a party leader said.

The 48-year-old Amethi lawmaker performed the puja amid chanting of 'mantras' (hymns) by temple priests. 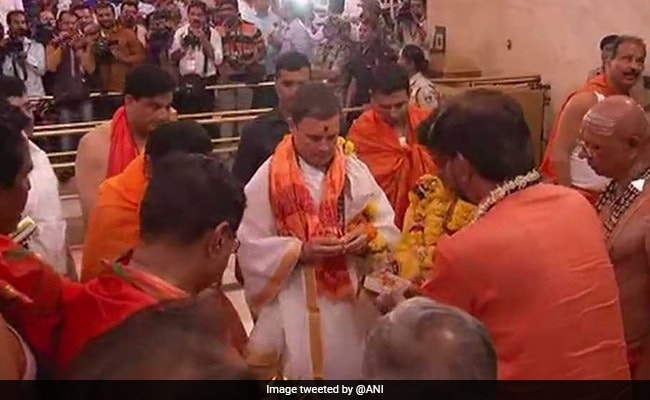 The Congress, had last year, said Mr Gandhi was an ardent "Shiv bhakt"

Mr Gandhi performed the puja of Lord Mahakal (Shiva) for around half an hour, he said.

The Congress, had last year, said Mr Gandhi was an ardent "Shiv bhakt". In August this year, he had undertaken Kailash Mansarovar Yatra to seek blessings of Lord Shiva.

BJP president Amit Shah had visited the temple on July 14. He had then flagged off the 'Jan Ashirwad Yatra' of Chief Minister Shivraj Singh Chouhan.

Madhya Pradesh, where the Congress is in opposition since 2003, will go to polls on November 28.

During his two-day tour, the Congress chief will visit Malwa-Nimar, a politically crucial region which accounts for 66 of the 230 assembly seats in the state.

In the 2013 assembly elections, the BJP had won 56 seats in the region. The Congress had managed to bag just nine seats, while one went to an Independent.

During his tour, Mr Gandhi would address rallies in Jhabua, Indore, Dhar, Khargone and Mhow, and also take part in a road show in Indore.

He will also address a rally in Ujjain on Monday afternoon.