Chief Justice of India NV Ramana raised the pendency aspect in a subtle manner, urging stakeholders - Bar and Bench - to resolve this problem. 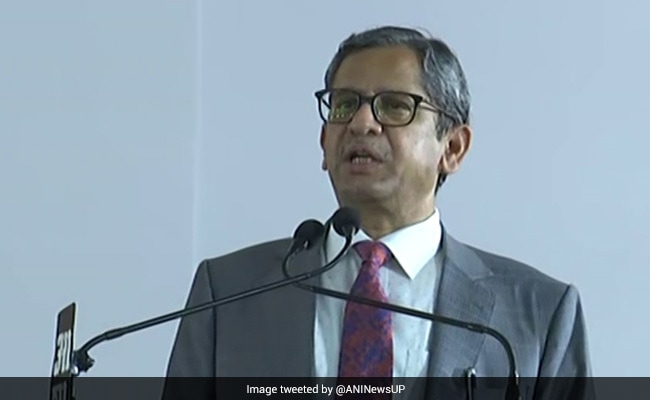 NV Ramana said, "I hope that this new complex will re-energize the Allahabad Bar."

Chief Justice of India (CJI) NV Ramana on Saturday termed as "very worrying" the huge number of pending criminal cases in the Allahabad High Court and urged the Bar and Bench to work together to resolve it.

Recently, the Allahabad High Court, in its affidavit filed in the top court over the pendency of criminal appeals in Uttar Pradesh, said that over 1.8 lakh criminal appeals are pending adjudication and it has disposed of 31,044 such pleas since 2000.

To deal with the situation where convicts have spent a considerable period of their jail term without hearing on their appeals in the high court, it was suggested by the Uttar Pradesh government that the bail pleas of life convicts, if they have undergone 10 years jail term, and in other cases, where half of the period of the maximum sentence awarded has been spent, can be considered by the Allahabad High Court.

The CJI raised the pendency aspect in a subtle manner, urging stakeholders - Bar and Bench - to resolve this problem.

Justice Ramana along with President Ram Nath Kovind took part in programmes, including the foundation stone-laying ceremony of the Uttar Pradesh National Law University here and a new building complex of the Allahabad High Court.

Referring to the proposed construction of a multi-level parking and advocates chambers complex, the CJI said these will re-energise the Bar and Bench in tackling the huge pendency.

"I hope that this new complex will re-energize the Allahabad Bar. I do not want to point any fingers or lay any blame regarding the pendency in the Allahabad High Court relating to criminal cases, which is very worrying. I request the Allahabad Bar and Bench to work together and cooperate to resolve this issue," he said.

The CJI said that the new multi-level parking and advocates chambers complex was an important step in creating a "barrier free-citizen friendly" atmosphere.

"I have been told that advocates in the Allahabad High Court were in great difficulty as they still don't have proper chambers. I am glad to find that the needs of women, and the differently-abled, have been consciously considered. This is a welcome move for advocates and litigants," he said.