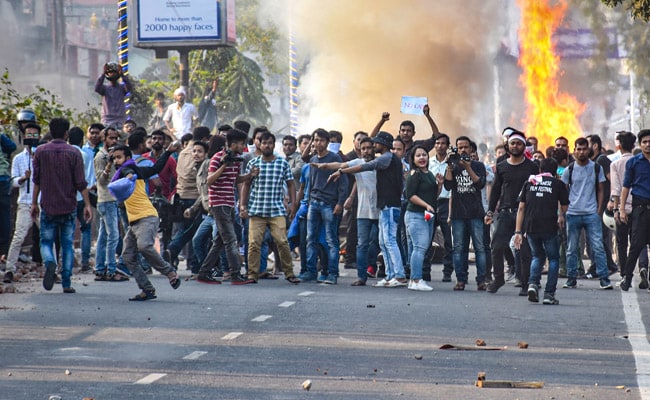 Citizenship Act Protests: There have been protests over past few days in several parts of the country.

The Supreme Court has issued a notice to the centre asking it to respond to the more than 60 petitions challenging the validity of the controversial new citizenship law. In a brief hearing this morning a three-judge top court bench headed by Chief Justice of India SA Bobde declined to stay implementation of the Citizenship (Amendment) Act, or CAA, saying "we will have to see whether the Act has to be stayed" and set January 22 as the next date of hearing in this matter.

On Tuesday, A school bus was damaged and a police booth was set on fire as clashes erupted at Seelampur in Delhi during a protest against the Citizenship Act. The police used batons and fired tear gas shells as some 2,000 protesters threw stones and set fire to vehicles. According to a senior police officer, the protest began around 1 pm, when school buses were on the roads taking children home. People from the area gathered at a prominent crossing for a protest march from Seelampur towards Jafrabad. Sources say trouble broke out when the crowd showed up a little early and was asked to disperse.

The citizenship law facilitates Indian citizenship for non-Muslims from Pakistan, Bangladesh and Afghanistan who entered India before 2014.

Here are the live updates on developments on Citizenship Amendment Act:

Dec 18, 2019 15:08 (IST)
In one of her strongest attacks on the BJP, Bengal Chief Minister Mamata Banerjee questioned if the party was a "washing machine" -- the only one that can legitimise citizenship. The Bengal Chief Minister has refused to implement the Centre's new citizenship law and the National Registry of Citizens, which she said today were "two sides of the same lollipop". On the third straight day of her protest against the new law, she questioned why the BJP was now demanding birth certificates, and said, "The cat is out of the bag".
Dec 18, 2019 13:06 (IST)
Will implement Citizenship Act in Karnataka: BS Yediyurappa
Chief Minister BS Yediyurappa on Wednesday said the Citizenship Amendment Act (CAA) will be implemented in Karnataka. His comments came at a time when several states, like West Bengal and Punjab, are refusing to implement the amended law amid protests against it. "We will implement the Citizenship Amendment Act in Karnataka," Yediyurappa told reporters. The Chief Minister also said that his government had no plans to change the name of the Indira canteens in the state, amidst rumours that it was planning to rename them to ''Maharshi Valmiki Anna Kutira''. The Citizenship (Amendment) Act, 2019 seeks to grant Indian citizenship to refugees from Hindu, Christian, Sikh, Buddhist and Parsi communities fleeing religious persecution from Pakistan, Afghanistan, and Bangladesh, and who entered India on or before December 31, 2014.
Dec 18, 2019 12:27 (IST)
The Delhi High Court on Wednesday agreed to hear a PIL seeking setting up of a fact- finding committee to look into the violence at Jamia Millia Islamia University following protests over the amended Citizenship Act. The petition was mentioned before a bench of Chief Justice DN Patel and Justice Rekha Palli by advocate Rizwan and the court allowed it to be listed on Thursday. The petition by Rizwan alleges that Delhi Police "resorted to use of arbitrary, excessive, discriminatory and illegal force against students, more particularly female students, of Jamia Millia Islamia University, on the false pretext of restoring law and order".
Dec 18, 2019 11:40 (IST)
Delhi Traffic Police advisory for people commuting from Noida to Delhi
Amid the ongoing protest against the Citizenship Amendment Act (CAA) 2019 in capital, the Delhi Traffic police on Tuesday blocked road no 13A between Mathura Road and Kalindi Kunj. The officials have advised people coming from Noida to take DND flyover or Akshardham to commute to Delhi. "Road No 13A between Mathura Road and Kalindi Kunj is closed for traffic movement due to demonstration. People coming from Noida are advised to take DND or Akshardham to reach Delhi," tweeted Delhi Traffic Police in the morning today.
Dec 18, 2019 11:24 (IST)
Supreme Court notice to government on Citizenship (Amendment) Act, will take up petitions challenging validity on January 22.
Dec 18, 2019 10:43 (IST)
Police Patrolling in Seelampur
Delhi Police carried out patrolling in Seelampur area of the city earlier this morning.

Delhi: Police party carried out patrolling in Seelampur area of the city earlier this morning. A protest which was held in the area over #CitizenshipAmendmentAct yesterday, had turned violent. pic.twitter.com/ZBeuRlZuyZ

Dec 18, 2019 10:24 (IST)
Normalcy returned in Guwahati while the curfew imposed in Dibrugarh was relaxed for 14 hours since 6 am on Wednesday. The curfew imposed in Guwahati, the gateway to the Northeast, on December 11 in the wake of protests against the citizenship law was lifted on Tuesday following improvement in law and order, officials said. No fresh incidents of violence have been reported in Assam on Wednesday morning.
Dec 18, 2019 10:21 (IST)
A Bahujan Samaj Party (BSP) parliamentary delegation leaves from the Parliament to meet President Ram Nath Kovind over Citizenship (Amendment) Act in Delhi.