In UP's Prayagraj, A Tinge Of Delhi's Citizenship Law Protests

Prayagraj Protest: By 4 pm, the crowd at Mansoor Ali Khan park, located around 200 km from state capital Lucknow, has swelled to around 5000 people.

Braving the freezing cold, thousands of people -- mostly women -- have been camping out at a park in Prayagraj for the last three days in a protest against the citizenship law inspired by Delhi's Shaheen Bagh. By 4 pm, the crowd at Mansoor Ali Khan park, located around 200 km from state capital Lucknow, swelled to around 5,000 people.

Many listen to speeches made by student organisations from the Left and the Samajwadi Party.  Others are busy recording the moment on their cellphones.

The loudest claps were reserved for an elderly woman who said she is not affiliated to any organisation or political outfit.

"I just want to say that we will be here for as long as required, till someone from the government speaks to us," she said.

Her audience agreed. The protest against the Citizenship Amendment Act or CAA, they say, will get over only after dialogue with the government.

Anjali, a student of Allahabad University, just finished making a poster when NDTV met her. The student is affiliated to a non-political organisation called Disha. The message on her poster read: "Ham ab bhi chup rahe to hamare liye koi kuch bhi nahin bolega (If we stay silent even now, no one would speak up for us".

"If we don't speak up, now the country will be in flames. No one lives in an isolated society, right? These flames will not spare anyone," she told NDTV. 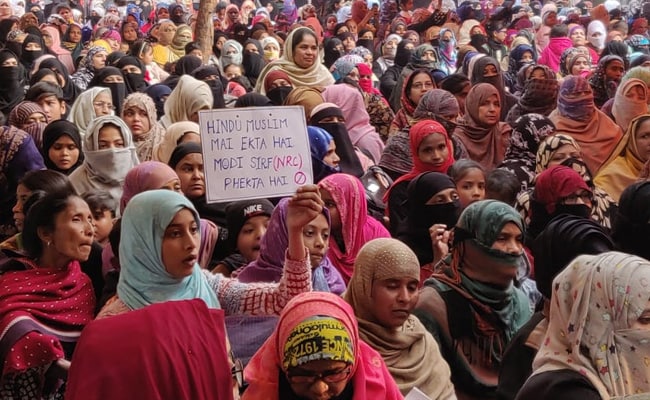 Many listen to speeches made by student organisations from the Left and the Samajwadi Party.

It is not just students who are attending the Day 3 of the protest.

Urusa, a homemaker from the city, said she had left two young children at home with her husband because she believes this is the time to protest.

"We have some value. We also deserve some respect. The Prime Minister says this NRC is a rumour, but then why is it happening in Assam? We are forever being made to stand in queues. This time, we shall get out right," she said.

Fatima, another local and a home-maker, is helping a group of volunteers put up an Indian flag at a corner of the park. "It is you," she quipped, adding, "It will give you a good frame for your reports. As you see, many of us have painted the flag on our faces too."

Asked why so many people were out in the park in this weather, she said, "How much proof will we give? We were born here in Hindustan," and then added, "Bharat Mata ki Jai".

Last month, Uttar Pradesh witnessed over 20 deaths in violent protests related to the citizenship law. Most of these deaths were due to bullet injuries, but the police have owned up to firing only in one instance.