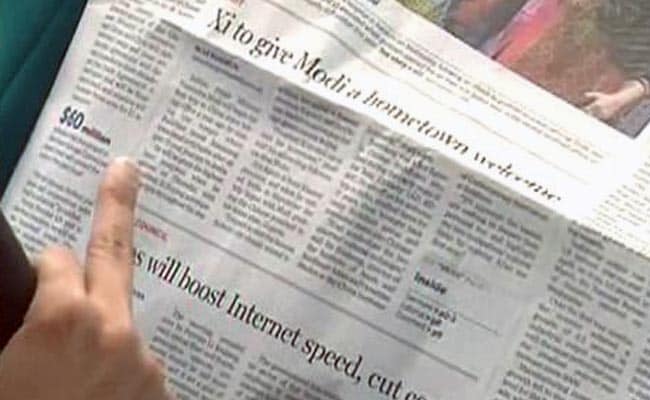 The Chinese media has given a positive response to Prime Minister Narendra Modi, who started his three-day maiden visit to the country this morning. Both state-run "China Daily" and Global Times" sounded upbeat, saying closer ties between the two nations can usher in exciting times for Asia.

The China Daily carried the report about the visit on its page one, where it talked about the "highest level reception" accorded to the Prime Minister by President Xi Jinping at his hometown Xian.

It also noted that it was "very rare for Chinese leaders to accompany foreign guests outside Beijing," and highlighted PM Modi's Chinese microblog tweet that said "President Xi invited me to visit his hometown."

The editorial inside, too, was very positive on the visit, saying, the two neighbours "can usher in an Asian Century".

In a special commentary, the state-run Xinhua news agency said, "It is not quite often for top Chinese leaders to travel outside Beijing to meet foreign guests. The tour of the ancient Xi'an City, a place closely connected to China and India's deep historical links, was a carefully orchestrated choice."

Before leaving Delhi, PM Modi had told the Chinese state-run CCTV that the visit would be a "new milestone" for Asia "I am looking forward to the trip to China... the 21st century belongs to Asia," he was reported as saying.

An article in the Global Times said, "Anyone with some geopolitical knowledge understands what revolutionary changes would happen to the political and economic landscape in Asia if China and India could join hands to forge ahead".

It, however, added, "But people are also aware that there seems always to be a lack of mutual trust between the dragon and the elephant" and attributed it to "more competition than complementarity".

The way out, it suggested, was increasing economic cooperation.

"China can make well-planned and targeted industrial transfers in accordance with the development and investment ability of its enterprises and set up production bases in India to make use of its cheaper labour force," the article said.