Chess, Dosa And Vada, The 44th Chess Olympiad Has It All

Geert van der Velde, chief executive officer (CEO) of Chessable, an e-learning platforming, is on a culinary adventure in India. 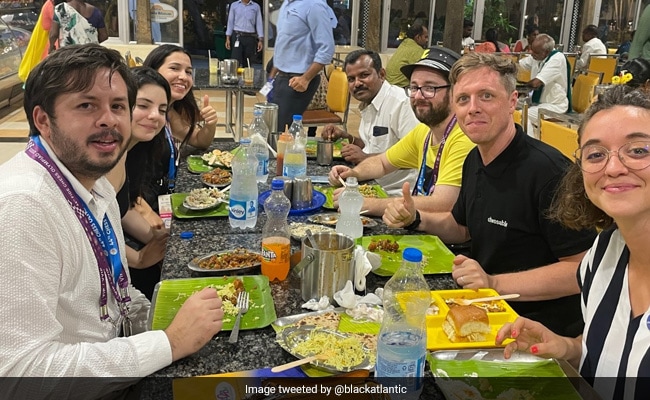 The battle of the brains is on in the 44th chess Olympiad here and those from abroad including the players are showcasing their prowess on the board and also trying out the local cuisine and relishing it.

According to Geert van der Velde, chief executive officer (CEO) of Chessable, an e-learning platforming for mastering the game, it was his first time in India and that eating food from a banana leaf was a very enjoyable experience for him.

"Well, I wasn't new to Indian cuisine but already a fan. Ever since I discovered Indian cuisine I've really enjoyed it. But, of course, this being my first time in India I had never tasted authentic Indian dishes cooked in India.

"What was totally new to me was eating with my fingers. I wasn't aware that this was the traditional way of eating food in India. I have dined at Ethiopian restaurants before where this is the custom. But, I had never eaten Indian food from a banana leaf and it was a very enjoyable experience," van der Velde told PTI.

His Twitter post "Loved the food so much I went back and brought the whole team..." went viral and saw Prime Minister Narendra Modi sharing it with the comment "India's culinary diversity is legendary. You will find a dish for every occasion. Glad to see you enjoying Chennai and exploring the city."

India's culinary diversity is legendary. You will find a dish for every occasion.

Glad to see you enjoying Chennai and exploring the city. https://t.co/OJKVhGIif8

He went on to say that "the richness of the flavors of the dishes here in Chennai is very special. There's a lot of depth to the flavour."

"Although I must admit that I have probably not yet developed enough of a palette for this type of deeply spiced food to be able to appreciate it fully. But, I hope that with time I'll come to appreciate it even more than I already do. It's clear to me now that I've only managed to sample a very small portion of all the fantastic dishes that Indian cuisine has to offer," he added.

The Chessable CEO further said, "And, I must say I have to laugh a little bit at myself for having shared that photo now that it's gone viral. Totally unexpected but a pleasant surprise."

He and his team had tried out the masala dosa, vada and gobi manchurian and liked it too, though it was "a bit spicy" apart from a variety of fried rice. He has had a taste of the local food at the venue and hotels and restaurants in the locality.

Van der Velde said the Olympiad was a great opportunity to come to India and connect with so many people including the players.

"...it is also a great opportunity for us to connect with them while we are here. It's a beautiful event. The best chess event, in my opinion," he added.

The Dutchman based in Spain has since tried different dishes and uploaded them on social media and received recommendations of what to try out. "I have got a list of food which I would like to try out," said van der Velde, who has become a fan of the local cuisine.

Meanwhile, the players from abroad too are feeling at home with the hospitality and the food on offer. The dosa seems to be a hit among the foreigners here for the Olympiad.

Several of the players have posted on social media about the food items they have enjoyed. Jersey's Tallulah Roberts posted on Twitter "dosa is yummy" while a few others too echoed similar views.

Georgian women's team captain Davit Jojua said the "food here is good" adding that he has stuck mostly to seafood while Iranian GM Pouya Idani said "generally the quality of the food was very good."

Meanwhile, chefs at the hotels, where the participants are put up, said they were given specific instructions on the menu with focus on European dishes and told to keep the food less spicy!

Volunteers have been one of the reasons for the Olympiad being held in a smooth manner. Some 400 of them have worked tirelessly behind the scenes to ensure that everything goes on without a hitch.

"There are about 150 volunteers at the venue. Right from being at the hall, assisting the arbiters, manning the gates to ensuring none bring electronic gadgets into the halls...We also have volunteers at the media centre and the expo area," Prateek Mohan, a state-level chess champion during his school days told PTI.

There are volunteers in the transportation team, who help in ensuring that the players reach the venue well ahead of time (matches start each day at 3 PM), he said.

He said a lot of thought went into the selection of the volunteers, who were picked after screening. There was also criteria like knowledge and interest in chess and being vaccinated.

Importantly, it was decided that the volunteers needed to be in the 18-30 age-group though there are some exceptions, he added.

The selected volunteers underwent training for some 20-odd days in the lead-up to the Olympiad.

Interestingly, there are people from various walks of life who have volunteered to work at the sport's showpiece event.

He said there were engineers, lawyers, CAs, doctors including dentists apart from chess arbiters and coaches. The love for chess has brought them together, to help, at the Olympiad.

"It has been an interesting and enjoyable experience for me. I hope it is the same for the others too. Being involved in volunteering for many years, you get a feel of things. It is a unique opportunity," he signed off.