Chennai Comes To A Standstill On First Total "Sunday Shutdown"

It was a virtual curfew with deserted roads, bridges and intersections fully blocked by police using barricades to enforce the stringent lockdown in the city and suburbs 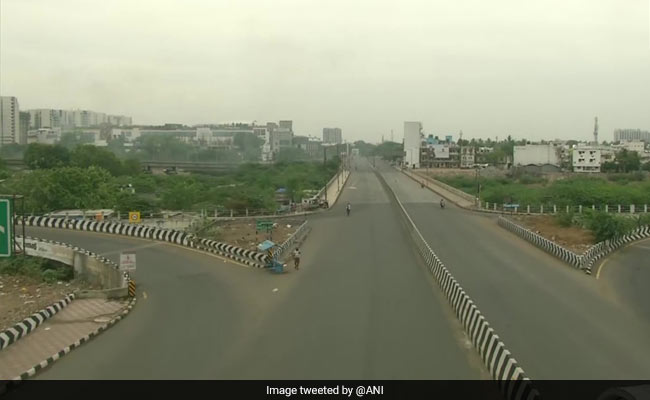 It was a virtual curfew with deserted roads, bridges and intersections fully blocked by police

The first "Sunday shutdown" as part of efforts to contain the spiralling COVID-19 cases brought Chennai and its suburbs to a standstill while the city civic body said its fever camps to help detect coronavirus cases early evoked tremendous response from the people.

It was a virtual curfew with deserted roads, bridges and intersections fully blocked by police using barricades to enforce the stringent lockdown in the city and suburbs which account for over 41,000 of the 59,377 COVID-19 cases in Tamil Nadu and 601 of the 757 deaths.

Barring police, sanitary workers and healthcare personnel others mostly stayed indoors and shops, barring pharmacies, remained shut throughout the day, the first of the two "Sunday shutdowns" during the 12-day intense lockdown enforced since June 19 to check the spread of the deadly virus.

While vegetable shops, groceries and petrol pumps have been allowed to function from 6 am till 2 pm during the 12-day lockdown, such outlets too are closed on Sunday.

State-run Amma Canteens, however, functioned as usual and distributed food free of cost to the needy.

The government has already announced that on two Sundays (June 21 and 28) barring milk supply, pharmacies, hospitals and ambulance services, no other services or shops will be permitted to function, in a bid to fully stop movement of people.

The present spell of intense lockdown was implemented in view of continuing surge in coronavirus cases days after the state allowed most services and businesses to function with restrictions under the "unlock-1".

On Sunday, of the 2,532 new virus cases in the state, 1,493 were from Chennai and the remainder was scattered in other districts. It was the fifth day in a row the state recorded over 2,000 fresh cases.

"The services came in handy for people for many ailments (apart from helping detection of coronavirus symptoms) especially when many clinics and dispensaries in private sector remain unopened," he said.

In the fever camps held by the GCC on Sunday, people were given masks and immunity boosting herbal drink "Kabasurakudineer," a concoction to beat cold and fever.

People susceptible to the infection were focused and 20,525 people attended 357 camps in which 872 Influenza like illness (ILI) cases were detected.

According to the civic body, the fever camps, which were 100 plus during the end of May, steadily increased and crossed the 500-mark on June 18 and touched 533 on Saturday.

Also, the corporation released a guide on "COVID-19 Appropriate Behaviour," to prevent virus spread and asked people to call the helpline number 044-46122300 for telecounselling saying "know how to cope with stress during this pandemic...lets beat this pandemic together as a society."

Following inputs that the public had ventured out of their homes in some interior areas, an appeal was made to them using public address systems to stay indoors and the response was good, he told reporters.

"People should continue to do it (cooperate)," he said adding though there may be some difficulties in view of the curbs to fight COVID-19, endurance shall stand people in good stead.

"Police is a friend of the people. Even if the restrictions are tough in some areas, people should kindly bear it as the present curbs are intended to facilitate return of normalcy," he said and appealed for cooperation.

Asked about some people in quarantine going outside their place of stay flouting norms, he said they were being monitored.

"We advise them, warn them and cases have also been filed," he said adding violations were being monitored and cases registered.

With the government sternly asking people not to use vehicles for purchasing essentials and approch shops within two km radius, the commissioner said vehicles seized for violations would be returned only after the end of the current lockdown.

Besides Chennai, the intense lockdown curbs are applicable in parts of nearby Chengelpet, Tiruvallur and Kancheepuram districts where the suburban areas are located.