Farmers' "Ingenious" Way Of Breaking Through Hurdle Is Hit On Twitter

Thousands of farmers from six states are heading to Delhi for a two-day "Chalo Delhi" protest march against three farm laws enacted by the centre recently. 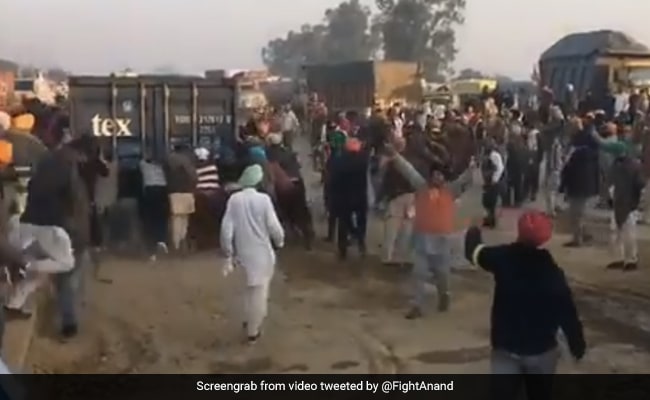 Thousands of farmers from six states are heading to Delhi for a two-day "Chalo Delhi" protest march.

As farmers fought their way through barricades and police forces on their way to Delhi for a planned protest march, their resourcefulness in crossing one such roadblock drew praise on Twitter.

Late last night, a large group of farmers in Haryana heading to Delhi through Sonepat faced a huge police barricade, where the road was blocked with large containers and trenches were dug up to prevent them crossing with their tractors.

The farmers raised slogans and pressed into the barricades but there were many obstructions.

In course of the night, they removed all the blocks.

Activist Anand Mangnale described how they did it, in a Twitter thread that is being widely shared.

"The farmers have broken through the Sonepat barricade. They pushed away the containers, filled the holes, removed cement structures and created a road despite police using water cannon. (Haryana Chief Minister) ML Khattar is done," Mr Mangnale said in a series of tweets.

"What's ingenious and amazing about it is the farmers tricked the police to use water cannons a few times in the morning and used that water and mud below these structures, containers to slide them away," he wrote.

He also posted a video of the farmers continuing on their way after removing the barricades. "ML Khattar, (Prime Minister) Narendra Modi thought the cement structures could stop them. The horrible night came to an end with an enthusiastic morning and amazing energy from farmers, which cleared the road in no time," he tweeted.

The #Farmers have broken through the #Sonipat barricade.
They pushed away the containers, filled the holes, removed cement structures & created a road despite police using water cannon. @mlkhattar is done now it's @narendramod at the Delhi Haryana Kundli border. #DelhiChalopic.twitter.com/POr9cXqBQJ

Thousands of farmers from six states are heading to Delhi for a two-day "Chalo Delhi" protest march against three farm laws enacted by the centre recently.

The farmers believe that the new laws will take away their guaranteed minimum price and leave them at the mercy of big retailers. The government, however, says the bills bring in much-needed reforms in the sector and empower farmers by allowing them to sell their grain anywhere in the country.