The government has launched massive operations to ensure that the infection does not spread to other big cats in their only abode in Asia. 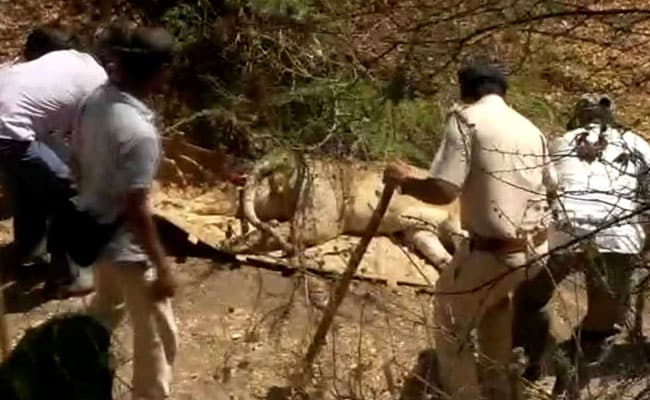 Canine Distemper Virus (CDV) was found in some of the 23 Asiatic lions who were found dead.

Canine Distemper Virus (CDV) was found in some of the 23 Asiatic lions which died in Gujarat's Gir forest since September 12, the state government said on Wednesday.

The government has launched massive operations to ensure that the infection does not spread to other big cats in their only abode in Asia.

According to officials, a deadly combination of Canine Distemper Virus and Protozoal infection is responsible for the death of at least 11 of 23 lions in the Gir sanctuary.

The condition of three of over 36 lions currently under observation of Forest department is critical, officials said.

Other lions in the sanctuary are being examined randomly to find out if they are infected by the CDV whose outbreak had wiped out 30 per cent population of lions in Serengeti forest areas in East Africa in 1990s.

The mass deaths have jolted the government which has launched a number of measures including importing 300 shots of a vaccine from the US to protect the lions.

The government has also sought national as well as international help in saving the lions.

Interestingly, Forest department has been maintaining that injuries caused by infighting is the cause behind the deaths of big cats in their only abode in Asia.

State Forest and Environment Minister Ganpat Vasava told reporters that Canine Distemper Virus (CDV) was found in the samples of four of the eleven dead lions by Pune-based National Institute of Virology.

Canine distemper is a contagious viral disease that affects a wide variety of animal species, including dogs, coyotes, foxes, pandas and wolves. It attacks the respiratory, gastrointestinal and nervous systems of animals.

Additional Chief Secretary, state forest department, Rajiv Kumar Gupta said CDV didn't cause deaths but it affects immunity of infected lions after which the lions cannot survive if they have any small diseases.

"Lions with CDV can be infected by Protozoa infection which is spread by ticks. Presence of both of these causes death. We have found CDV in four and Protozoa in seven out of eleven dead lions," Mr Gupta said.

Wildlife experts had warned that presence of the last surviving Asiatic lions at one place could be dangerous in case of a viral epidemic.

A case is pending before the Supreme Court to shift some of the lions to forests of Madhya Pradesh.

When asked if the deaths of Asiatic lions in Gir would reignite the debate of trans-locating the big cats to Madhya Pradesh for safety reasons, Vasava maintained that the entire issue is pending before the apex court.

"There is no lapse on our part in taking care of our lions. The matter of shifting them to Madhya Pradesh is sub-judice. As per the IUCN (International Union for Conservation of Nature) guidelines, a place has to be identified first. Only then the issue of relocation comes into picture," said Vasava.

Responding to a query whether the Forest department has failed to detect the presence of virus in lions in time, he said, "There are no visible symptoms of that viral infection. Lions appear healthy despite the infection, as the virus attacks their lungs".

Meanwhile, Mr Gupta said the government has taken a serious note of the presence of CDV though its spread is restricted to four lions so far.

"We have urgently imported 300 (shots of) a vaccine from Atlanta, which we will administer to 36 lions, if needed, who are under observation," he said.

Mr Gupta said Forest personnel will collect random samples of blood and swabs of lions from other ranges of the Gir forest, as a measure to ascertain their health status.

"In the next seven days, we will vaccinate all the cattle present in surrounding areas of the Gir forest," he said.

"We have also sought national and international help to fight the menace on directions of chief minister (Vijay Rupani). We are also seeking the help of experts of Royal Veterinary Society of London," he said.

Forest department had launched a screening operation in Dalkhaniya range of Gir sanctuary to identify sick lions following the death of 11 big cats between September 12 and 19.

A total of 12 sick lions, which were caught and shifted to a rescue centre, have died since then, taking the toll to 23.

Case Filed Against Ex-IAS Officer For Spreading Misinformation: UP Police