Cabinet Reshuffle: The exits have made a bigger impact than the entries and the one that has had the most shock value was that of Ravi Shankar Prasad, one of the most visible faces of the government.

The jumbo recast of Prime Minister Narendra Modi's cabinet appears to have been based as much on damage control as a look to the future in states where the BJP hopes to expand. The exits have made a bigger impact than the entries and the one that has had the most shock value was that of Ravi Shankar Prasad, one of the most visible faces of the government.

The public perception here is that Mr Prasad was found lacking when it came to his own domain. The huge row with social media giants like Twitter over the new digital rules has drawn much attention from the international community and gave the government much negative publicity.

Sources said it was Mr Prasad's inability to resolve the rows and bring the tech firms on the same page with the government that went against him. 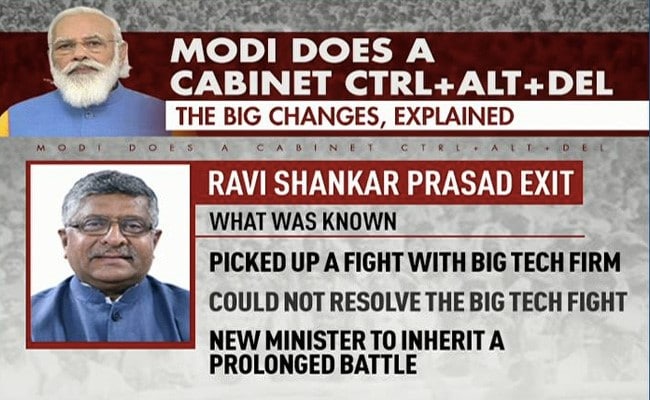 The other big reason, sources said, is that the former minister was struggling to implement PM Modi's ambitious Bharatnet programme, meant to bring internet to every village.

Meant to be a high impact, flagship programme of the government, Bharatnet was struggling and had missed the June 2021 deadline.

Mr Prasad's functioning as the law minister was also in question, sources said. 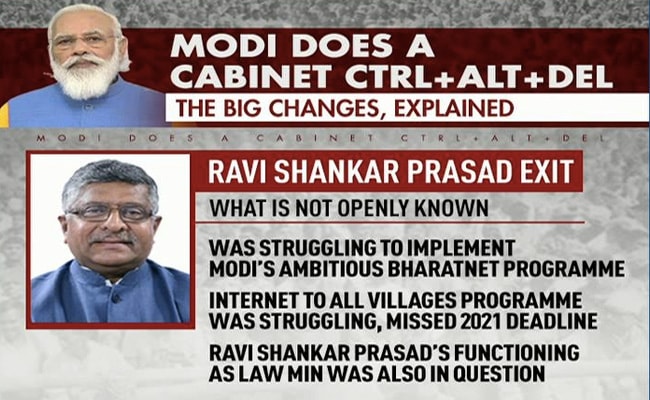 The responsibility of resolving the tech jumble has now fallen on Ashwini Vaishnaw, a technocrat with degrees from IIT Kanpur and Wharton School, Pennsylvania University.

Mr Vaishnaw has held leadership roles across major global companies such as General Electric and Siemens, which is expected make him a better interface. The government, sources said, expects a tactful handling of the big tech mess. 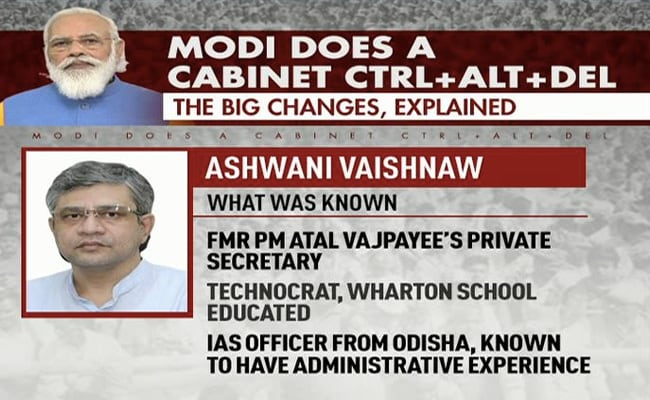 His real value, though, is his skill in the arena of Public Private Partnership, which is expected to fast-track the Bharatnet programme. 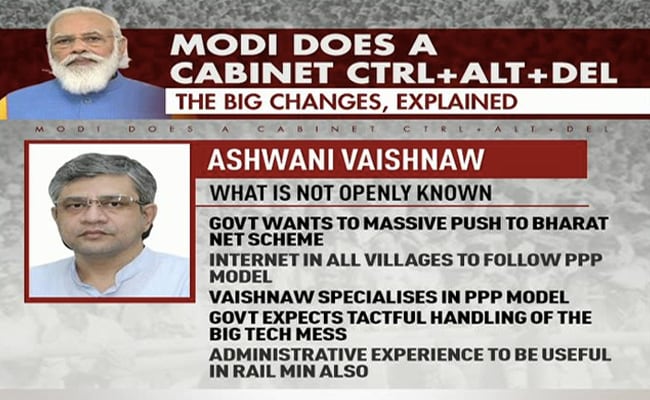 The administrative experience of the IAS officer from Odisha -- who was once the private secretary of former Prime Minister Atal Bihari Vajpayee -- is expected to be useful in the rail ministry, which is his other charge.

Of the new entrants, the new health minister Mansukh Mandaviya is set to be the one under most scrutiny, given the impending third wave of Covid. While the removal of Dr Harshvardhan is clearly meant to offset the criticism over the government's handling of the Covid crisis and the tardy pace of vaccination, the measures taken over the coming days will decide how the battle against the virus plays out. 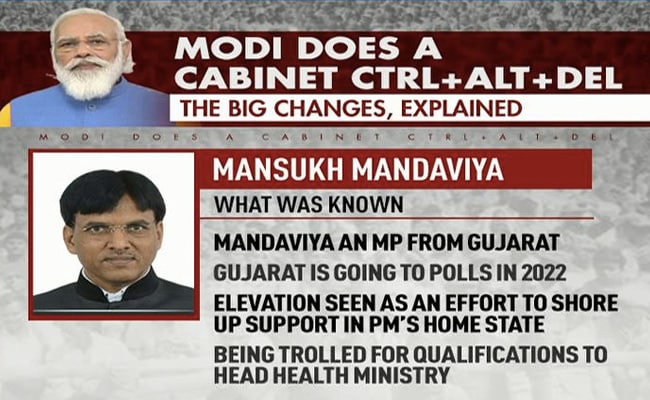 Sources said Mr Mandaviya -- an MP from Gujarat -- had earned the Prime Minister's praise as the shipping minister. During the peak of the second wave, he oversaw the import of crucial cryogenic tankers for oxygen imports and was applauded internally for silent crisis management. His elevation is also expected to have spin-offs during the next year's state elections, shoring up support for the party in the Prime Minister's home state where the Congress has given it a tough fight in the last election.

The new minister, however, is already being trolled over his qualifications for the job, especially in the backdrop of the government's claims of inducting highly educated, trained professionals in the ministry. Mr Mandaviya had studied veterinary science at the Gujarat Agricultural University.

Two other inductions were expected to bring political heft to the ministry: Kaushal Kishore from Uttar Pradesh where assembly elections are due next year, and Nitish Pramanik from Bengal, a state the BJP hopes to win in the future.

Mr Kishore represents the Awadh region of Uttar Pradesh and the elevation is seen as an attempt to provide regional representation in cabinet. 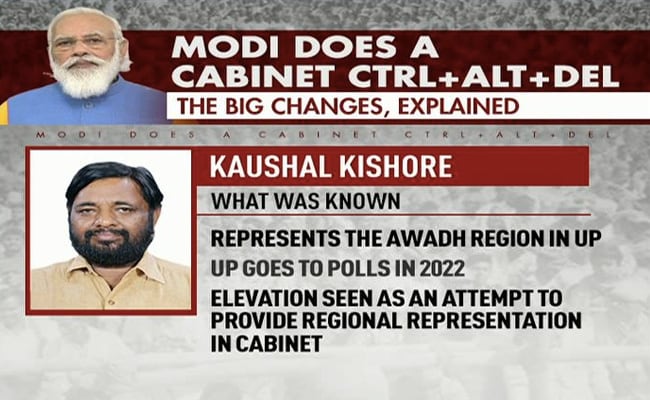 What is not so well known is that Mr Kishore is a critic of Yogi Adityanath who wrote him a letter complaining of arrangements to handle the Covid pandemic in the state during the second wave, when the Chief Minister claimed there was no shortage of drugs or oxygen in Uttar Pradesh.

Sources said Mr Kishore was publicly assured by Union Home Minister Amit Shah that he will be made a minister, and that promise has now been kept. 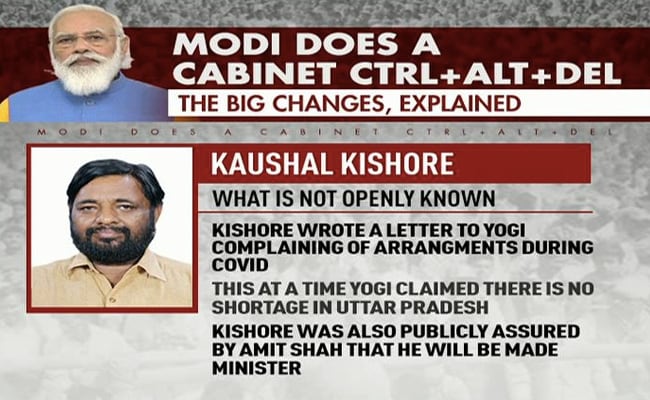 Nitish Pramanik, one of the young MPs from Bengal, is a vocal critic of Chief Minister Mamata Banerjee. His induction as Amit Shah's junior in the home ministry has raised speculation about stronger Central monitoring of the Bengal law and order situation. 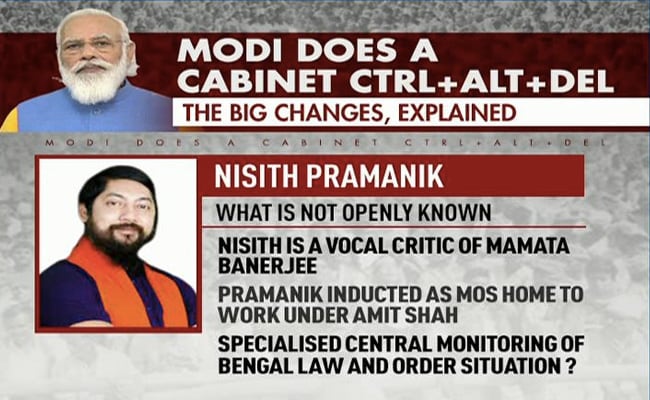