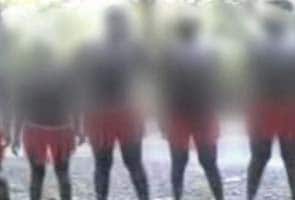 Survival International welcomes the Supreme Court's decision to ban tourists from the Andaman Trunk Road as a positive step in the right direction to tackle 'human safaris' to the Jarawa tribe. The road cuts through the Jarawa's reserve in the Andaman Islands and currently brings hundreds of tourists through the reserve each day.

Survival has been campaigning for the rights of the Jarawa tribe for almost 20 years and has long been calling for the road to be closed completely. In 2011, along with local Andaman organisation Search, Survival launched a tourist boycott of the road through the Jarawa's forest. This move was supported by many of the main tour operators in the Andamans.

After a protracted legal battle, the Supreme Court ordered the Andaman government to fully implement the five kilometre Buffer Zone around the Jarawa's reserve last July, explicitly ordering the limestone caves and mud volcano on Baratang Island to be closed. The Buffer Zone had been set up in order to protect the Jarawa from exploitation by tourists. Tourists driving through the Jarawa reserve are ostensibly visiting the caves and volcano, although many will openly admit that the main attraction is to ogle at the Jarawa on the way.

The Andaman authorities ignored this ruling and allowed the caves to remain open. This resulted in a 'serious and continuing contempt of court' through 'flagrant breaches', as a letter sent by Survival International to the judges of the Supreme Court earlier this month highlighted. In the letter, Survival appealed for the Supreme Court to take action.

Last week the Andaman administration again attempted to circumvent the Supreme Court's July ruling by announcing a watered down version of the Buffer Zone. The new Buffer Zone would allow the limestone caves and mud volcano to remain open - and therefore for the human safaris to continue.

The question ultimately comes back to the Jarawa's right to choose their way of life. Allowing tourists to travel along the road robs the Jarawa of their right to control their own land and risks bringing in diseases to which they have no immunity. The Supreme Court judges are reported to have asked the Andaman authorities, whether 'they want the Jarawa to be kept in isolation or to be assimilated in the mainstream'. But this is the wrong question to be asked. It must be up to the Jarawa to decide how they want to live their lives - it is not a question of isolation or mainstreaming, but of the Jarawa making their own choices about their lives and their future.

The question the Supreme Court should be asking the administration is, 'How are you going to protect the Jarawa's land and ensure that they are able to make their own choices about how they live their lives, without having other people's notions of 'development' imposed upon them?'

Promoted
Listen to the latest songs, only on JioSaavn.com
Whilst the Supreme Court's decision is certainly a step in the right direction, it is only an interim order. The battle for the Jarawa's rights to be respected is still far from won. It is now time for the Andaman authorities to put an alternative route in place in order that the Jarawa can live in peace on their own land in the manner of their own choosing.