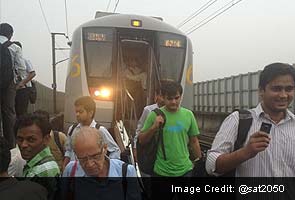 New Delhi: For the second day in a row, North India found itself without power. This time, the extent of the crisis was much worse - the East was affected too.  Three major supply grids which supply power to 19 different states had tripped.  At about 2 pm, Power Minister Sushil Kumar Shinde promised that the situation would return to normal within 90 minutes.  More than 600 million Indians were affected. Like yesterday, hundreds of trains stopped in their tracks. The Delhi metro stopped running for more than an hour. (Read Top 10 developments)

Yesterday's power outage - the worst in a decade for India - hit seven states and Delhi. Today's blackout, described as one of the world's largest, began at about 1.30 pm.  The Northern, Eastern and North Eastern supply tripped in quick succession.   The crisis was allegedly triggered after four states - Rajasthan, Haryana, Punjab and UP - drew much more than their assigned share of power. "I have told states using more power than they are meant to stop it.  They shall be punished," said Mr Shinde.  Sources say that the Northern and the Eastern grid should be back up by 5 pm followed by the North Eastern grid two hours later. (Another Blackout: Share pics, videos)

The supply to Delhi at 1.30 pm was reduced to an all-time low of 40 MW against its demand of 4000 MW, bringing the capital to its knees. West Bengal Chief Minister Mamata Banerjee asked all government offices to shut early, and urged the private sector and schools to do the same, to protect against commuter chaos in the evening.

100 MWs of emergency power is being provided to VVIP areas in the capital.  The priority is to get hospitals, traffic signals and the metro up and running. Delhi Metro services partially restored

Promoted
Listen to the latest songs, only on JioSaavn.com
The consecutive blackouts have made international headlines and underscored India's weak infrastructure and inability to meet energy demands.

A grid receives power from generation stations, and passes it onto load centres, which is where distribution companies pick up their share, and pass electricity onto consumers.  At grids, there has to be a careful balance between the supply and the amount of power collected.  A line can trip if more power is drawn than provisioned for.   And a grid needs mechanisms to ensure that if one line trips, it doesn't have a cascading or domino effect on the others.