BJP's Pragya Thakur Missing In Court, A Regular In Parliament

Pragya Singh Thakur, the Lok Sabha representative from Bhopal -- who is facing trial in the Malegaon blasts case - also insists that she is a regular at the court 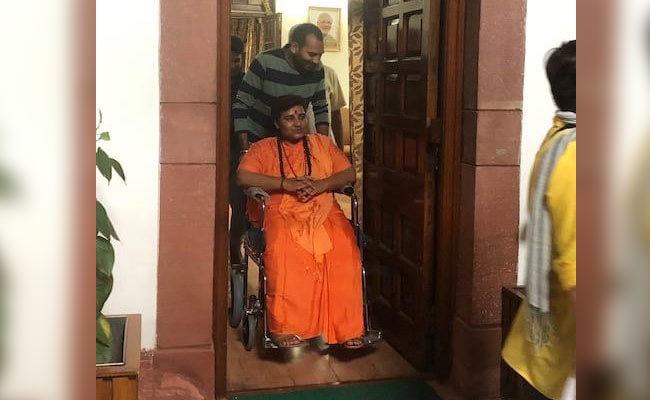 Asked why she missed court on several occasions, Pragya Singh Thakur said she has been unwell.

Pragya Singh Thakur may not be regular with her court appearances despite being a terror accused. But when it comes to attendance in Lok Sabha, the first-time lawmaker is definitely a topper. According to the Lok Sabha secretariat, of the 15 days so far, Pragya Singh has clocked her attendance 14 times.

"I would have scored 100 per cent but on Monday, my blood pressure was very high. So I was hospitalised in RML and could not come that day," she told NDTV.

The Lok Sabha representative from Bhopal -- who is facing trial in the Malegaon blasts case - also insists that she is a regular at the court. "My case is going on in Mumbai and am following it up regularly," she told NDTV. Asked why she missed court on several occasions, she said she has been unwell.

The Malegaon blasts case is being given a daily hearing at a court in Mumbai. "Each working day, the case is being heard as we want to complete trial," a senior official of the National Investigation Agency told NDTV.

But 49-year-old Pragya Thakur had sought exemption from hearings, saying she is a lawmaker and has to attend parliament daily.

The court, however, rejected her application for permanent exemption. "She has to appear in court once a week. Her counsel gives an undertaking every day as to why she can't appear," Special Public Prosecutor Avinash Prakash Rasal told NDTV.

"There is little hope she would come to attend court hearing as long as the parliament session is on," he said. The first session of the 17th Lok Sabha will continue till July 26.

On Friday, Pragya Thakur reached parliament very late, well after 1 pm. "I am very late today otherwise am very punctual," she said while rushing into the Lok Sabha in her wheelchair.

Often referred to as "Didi", she is greeted by everyone whom she crosses in a wheelchair. Some touch her feet to seek blessings some just bow. She normally sits near exit gate in the Lok Sabha as it is easier to move out without disturbing anyone.

According to parliament staff, Pragya Thakur spends most of the time in parliament and is often one of the last to leave.

"There is so much to learn here about parliamentary system and procedures I keep myself busy learning new things," she explained before getting surrounded by a group of charted accountants, who came to Delhi from Jaipur to hear the budget speech.

To them, she explained the idea of "Akhand Bharat" - an undivided India.

"India has been divided many times in the past but not anymore now we don't want vibhajan we want "akhand Bharat", she said.

Speaking to another group, she advocated reforms for Muslims. "We need to push reforms as only that can get them out of the dark ages," she said, citing the case of last week's attack on a temple in Delhi, where "a simple fight led to desecration of Hindu gods".

"This is the time to reform Muslims. PM Modi has taken an initiative about modernising education system we all need to give it a push," she said.

The Mumbai court will hear Malegaon case next on July 6 and will record the testimony of the 124th witness. There are over 450 witnesses in the case.