BJP MP Parvesh Verma was seen sitting in front of the Gandhi statue in Parliament holding a placard that read: "Shaheen Bagh shooter Kapil (Gujjar) is an AAP worker." 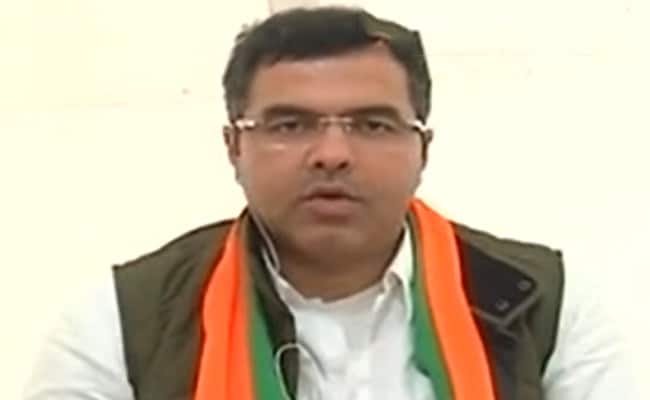 Protest comes after the Delhi Police claimed that Kapil Gujjar was associated with AAP.

He was seen sitting in front of the Gandhi statue in Parliament holding a placard that read: "Shaheen Bagh shooter Kapil (Gujjar) is an AAP worker."

This comes a day after the Crime Branch of Delhi Police claimed that Kapil Gujjar was associated with AAP based on photographs recovered from his phone in which he and his father are seen along with prominent leaders of the party. Kapil Gujjar, 25, -- who allegedly shouted "Jai Sri Ram" as he fired shots standing near police barricades on Saturday -- has confessed to being a member of AAP, officers of the Crime Branch said.

Some photos were recovered from his which showed him and his father Gaje Singh with AAP leaders such as Atishi and Sanjay Singh.

However, Arvind Kejriwal today accused Home Minister Amit Shah of "using Delhi Police" in a "petty conspiracy" to target his party 48 hours before voting in the capital. The Delhi Chief Minister also referred to the shooter's family denying any links with AAP.

The family of the shooter, Kapil Gujjar, has also denied any links with AAP or politics.

BJP's Parvesh Verma was barred by the Election Commission on January 30 from campaigning in Delhi elections for 96 hours over controversial remarks.

The West Delhi MP had said, "Lakhs of people gather there (Shaheen Bagh). People of Delhi will have to think and take a decision. They will enter your houses, rape your sisters and daughters, kill them. There is time today, Modi Ji and Amit Shah won't come to save you tomorrow."