The AAPclaimed the Lt Governor cleared CBI probe into the pre-bid process for the bus purchases to "deflect" public attention from corruption charges levelled against him. 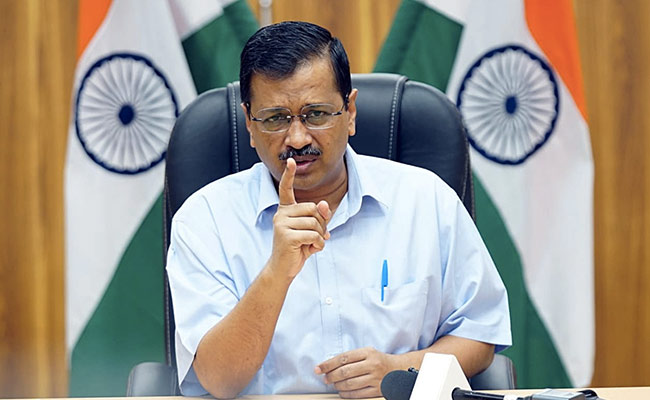 ArvindKejriwal and corruption have become synonymous, BJP has said. (File)

The BJP alleged on Sunday Delhi Chief Minister Arvind Kejriwal and corruption have become synonymous and demanded his resignation, in its latest attack on the AAP that came after the Lieutenant Governor cleared a Central Bureau of Investigation (CBI) probe in the alleged irregularities in the purchase of low-floor buses.

The AAP hit back, saying Lieutenant Governor VK Saxena approved a CBI probe into the pre-bid process for the purchase of 1,000 buses by the Delhi Transport Corporation (DTC) just to "deflect" public attention from the corruption charges levelled against him.

At a press conference in Delhi, BJP's national spokesperson Gaurav Bhatia alleged each department of the AAP government is involved in corrupt activities with "contracts and tenders being tailor-made to benefit the friends of Kejriwal".

"First, it was the excise policy, now there are irregularities in the purchase of buses. Giving tenders in exchange of money has become an important part of Kejriwal's politics. Kejriwal and corruption have become synonymous.

"How can you claim to be 'hardcore honest'? People have understood you are 'hardcore corrupt'... You have no right to remain in the chair of the chief minister," Mr Bhatia said in the joint press conference with Delhi BJP chief Adesh Gupta.

He said Delhi Transport Minister Kailash Gahlot was made the chairman of the committee for tendering and procurement of buses by Delhi Transport Corporation (DTC) "with the intention of giving benefits to friends".

The appointment of DIMTS as a bid management consultant for this tender was done to facilitate wrongdoing, Mr Bhatia alleged.

The BJP spokesperson said the AAP has not responded to the "charges of irregularities", but raised another unrelated issue to divert attention.

"Kejriwal doesn't believe in CVC, his only motive is DCC -- direct cash collection... The journey from scheme to scam has become very easy for Kejriwal," he alleged.

Delhi BJP leader Vijender Gupta claimed the 1,000 buses would cost Rs 870 crore but the city government decided to give Rs 3,500 crore to a private company as maintenance charges.

Leader of Opposition in the Delhi Assembly Ramvir Singh Bidhuri said the AAP government could not procure the buses as the BJP MLAs brought the alleged irregularities to everyone's notice.

On Saturday, Delhi LG V K Saxena approved a proposal to forward a complaint to the CBI to probe the alleged corruption in the procurement of the buses.

A complaint addressed to Mr Saxena in June this year had claimed that the appointment of the Minister of Transport as the chairman of the committee for tendering and procurement of buses by Delhi Transport Corporation (DTC) was done in a "premeditated manner".

The complaint had alleged irregularities in a July 2019 procurement bid for 1,000 low-floor BS-IV and BS-VI buses and another bid made in March 2020 for the purchase and annual maintenance contract for low floor BS-VI buses, the sources said.

The AAP said it is not against any probe by the CBI or any other agency in the matter.

But, it is "unfortunate" that Mr Saxena, who is facing allegations of corruption, has endorsed a probe into tender process for procurement and maintenance of buses by the Delhi government "for the second time" in a month even as the CBI is already conducting a "preliminary inquiry" into the case and yet to claim any breakthrough.

"In this matter, neither a single bus was purchased nor even a rupee was paid to anybody. Then where did the corruption take place?" AAP's chief spokesperson Saurabh Bharadwaj told a press conference in Delhi.

The Kejriwal government put the tender process on hold after :some inquiry" was initiated against it, he said.

"It was decided not to go ahead with the tender process till the conclusion of the inquiry. It is still on hold for the past two years and we could not purchase even a single bus," Mr Bharadwaj said.

The CBI, which had registered a PE (preliminary inquiry) case in the matter, has also been conducting a probe into it for about one-and-a-half years but it is yet to claim any breakthrough.

“But, the LG (Saxena), who wakes up every morning and starts levelling fake and baseless corruption charges against his own Delhi government, has recommended CBI probe into the matter yesterday for the second time in a month just to deflect public attention from the corruption charges levelled against him," the AAP spokesperson charged.

"Only three weeks ago, he had recommended a CBI probe into the matter," he said, adding it is "unfortunate".

The AAP leaders have levelled three "big and serious allegations" of corruption against Mr Saxena "with proof", Mr Bharadwaj said.

"But instead of coming out and say that he is ready to face a probe, Saxena is staging a new drama every day by levelling baseless allegations against the Kejriwal dispensation," he said.

In a video message, AAP MP Sanjay Singh hit out at Saxena on the issue and alleged that the LG has been levelling one after another "baseless allegations" against the Kejriwal government as "he wants commission from the contractors" in award of the government works.

"You deal with the contractors directly for commission in award of work. This business of loot and corruption that you ran at KVIC is not possible in Delhi government," he said.