BJP lawmakers above 75 unlikely to get tickets say sources. Many veterans have already declined to contest elections 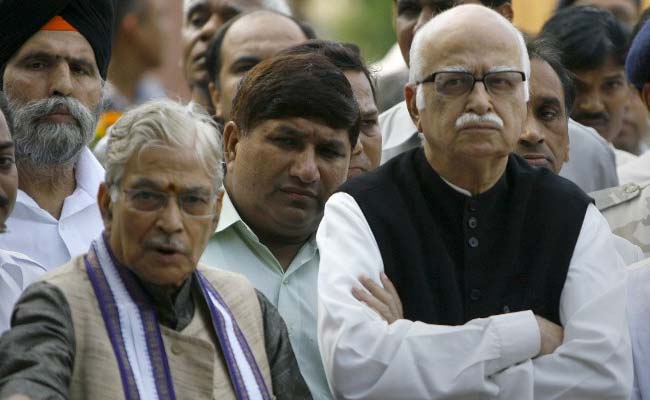 BJP veterans above 75 unlikely to get tickets for the general elections: Sources

The BJP is gradually easing out party veterans, who are 75 and above, from the poll fray. After LK Advani was replaced by party chief Amit Shah from Gandhinagar constituency, several sitting lawmakers including Bhagat Singh Koshyari, 76, from Nainital and BC Khanduri, 85, from Pauri in Uttarakhand have been left out, and Shanta Kumar, 84, the lawmaker from Kangra in Himachal Pradesh has already said that he will not be contesting the elections.

BJP insiders say, another veteran, Murli Manohar Joshi may be dropped from his constituency Kanpur and it's not clear whether Lok Sabha Speaker Sumitra Mahajan will be getting a ticket from Indore. Sumitra Mahajan is turning 76 this year. Affectionately called 'tai' in the city, she has been winning from Indore since 1989, when she defeated former chief minister and senior Congress leader Prakash Chandra Sethi by over a lakh votes.

Senior Madhya Pradesh BJP leader Satyanarayan, 79, popularly known as Sattan, last week said that the Speaker should not be given a ticket since she hasn't been in touch with people in her constituency. "If the party gives a ticket to Sumitra Mahajan for the ninth time, I will be forced to think on contesting against her as an Independent candidate. Majority of the local BJP workers are unhappy with her as she has not been around and also hasn't done any work in Indore," Mr Satyanarayan claimed.

State BJP spokesperson Umesh Sharma said that he hoped Mr Satyanarayan would come around. "Sattan is one of our big leaders since the Jan Sangh days. I feel we will be able to placate him and he would support the candidate chosen by the party," Mr Sharma told news agency PTI.

In Bihar, Hukum Dev Narayan Yadav, 79, has already expressed his desire to retire from active politics. The BJP today announced his son, Ashok Yadav's name as candidate from Madhubani, the constituency of Yadav senior.

Another lawmaker, Kalraj Mishra from Deoria in Uttar Pradesh, is over 75 and has already told his party that he will not be contesting.

Two senior leaders and ministers in the Narendra Modi cabinet, Sushma Swaraj and Uma Bharti, have declined to contest citing health reasons. Both are however in their sixties.