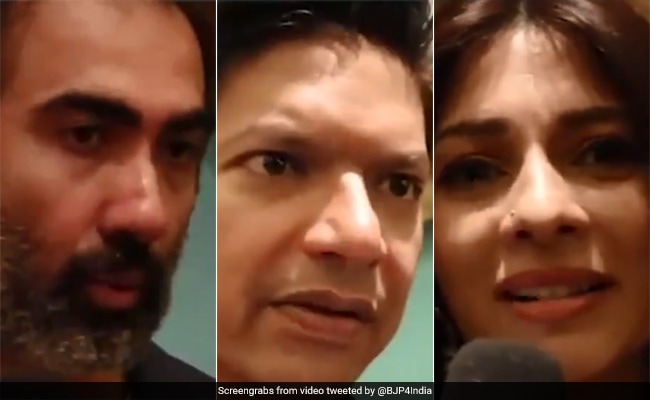 A day after actor Deepika Padukone visited Delhi's Jawaharlal Nehru University to meet students and teachers, who were attacked by a masked mob last week, the BJP released a video with statements from celebs supporting the Citizenship (Amendment) Act, or CAA. Deepika Padukone is the first Bollywood A-lister to visit JNU after the mob attack.

The BJP's video, shared on social media this afternoon, features singer Shaan, actors Tanisha Mukerji and Ranvir Shorey and director Anil Sharma, among others. It comes days after Union Minister Piyush Goyal and BJP vice president Baijayant Jay Panda hosted a dinner in Mumbai for several Bollywood celebrities to discuss the CAA, which fast-tracks the process of giving citizenship to persecuted non-Muslims from three neighbouring countries. The meet was reportedly skipped by many top stars.

"The Citizenship Amendment Act, 2019 does not affect any Indian citizen. Watch what the artists have to say about CAA," BJP wrote while sharing the video.

The video begins with Shaan calling CAA an "inclusive act" that would "give citizenship to persecuted minorities."

The sentiment was echoed by Tanisha Mukerji of Neal 'n' Nikki fame, who also added that she's "very proud and very happy" to be associated with the amended law.

"CAA on its own, I already agreed, it's a humanitarian act," said Ranvir Shorey in the video. Watch it below:

The Citizenship Amendment Act, 2019 does not affect any Indian citizen.

Watch what the artists have to say about CAA. #IndiaSupportsCAApic.twitter.com/Bn8exkC1HC

The video has been viewed more than 30,000 times since it was shared on Twitter.

The BJP's video, and the meeting in Mumbai before it, comes as part of the ruling party's efforts to drum up support for the CAA. Critics of the Citizenship (Amendment) Act say that it discriminates against Muslims and violates secular tenets of the Constitution. Large-scale protests have been raging for weeks across the country against the citizenship law.

Some big Bollywood stars have avoided taking a stand on the CAA, while celebrities like Swara Bhaskar, Anurag Kashyap and Shabana Azmi have voiced their criticism. Anurag Kashyap, Swara Bhasker, Vishal Bhardwaj and Richa Chadha also joined protests in Mumbai against the mob attack at JNU.