Harpreet Singh said the photograph, clicked around seven years ago, has been taken off his social media page without his permission.

Harpreet Singh said he would be sending legal notice to the party.

A farmer protesting at Delhi's Singhu border for two weeks has said his image has been illegally used by the BJP to promote the farms laws in its advertisements. Harpreet Singh, who is around 35 years old, said he would be sending legal notice to the party, with his original photograph and a copy of the advertisement.

The advertisement, meant to address one of the biggest concerns of the protesting farmers -- the prospect of the government phasing out its guaranteed prices for crops -- was posted on Facebook by the Punjab unit of the BJP on Monday.

The advertisement, which also gave data on government procurement of crops, including rice and pulses, featured an edited image of a farmer carrying a plough.

Mr Singh said the photograph, clicked around seven years ago, has been taken off his social media page without his permission. 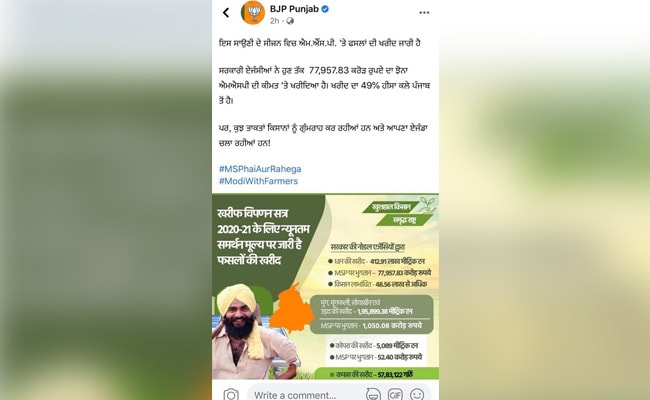 The advertisement, which also gave data on government procurement of crops, including rice and pulses, featured an edited image of a farmer carrying a plough.

The farmer from Punjab's Hoshiyarpur, who had also worked as an actor, said he came to know about it after a friend noticed the advertisement and sent a message on WhatsApp.

The farmer said he has been staying at the Singhu border, where thousands have been assembling since November 26, demanding scrapping of the farm laws.

With five rounds of negotiations with farmers inconclusive and the farmers' representatives decisively turning down all offers of amending the laws, the government has embarked on a massive outreach programme.

While Prime Minister Narendra Modi has repeatedly tried to assure farmers regarding the laws passed by parliament in September, the Centre has also reached out with statements, advertisements and messages on social media.

The government says the laws are major reforms in the farm sector that will help farmers dispense with middlemen and allow them to sell produce anywhere in the country.

The farmers say the laws will shrink their income by doing away with the minimum prices fixed by the government and leave them at the mercy of corporates.

The Supreme Court has now said that a committee be formed to deal with the issue. The committee, the court said, must have "independent members with knowledge of agriculture and hear both sides and give report on what is to be done".

The protests, meanwhile, should be allowed to continue as long as it poses no threat to life or property, the court has said.