Bilkis Bano, 21 years old at the time, saw seven members of her family murdered. Among them was her toddler daughter. The woman, who was five months pregnant, was then gang-raped.

7 members of Bilkis Bano's family, including her daughter, were murdered. She was then raped.(FILE)

Bilkis Bano said she was "bereft of words" and "numb" after 11 men who raped her during the 2002 Gujarat riots, were set free. "I trusted the highest courts. I trusted the system, and I was learning slowly to live with my trauma," she said. On August 15, all the 11 convicts sentenced to life imprisonment walked out of the Godhra sub-jail after the BJP government in Gujarat allowed their release under its remission policy. Seven members of Bilkis Bano's family, including her toddler daughter, were murdered. The woman, who was five months pregnant, was then gang-raped. 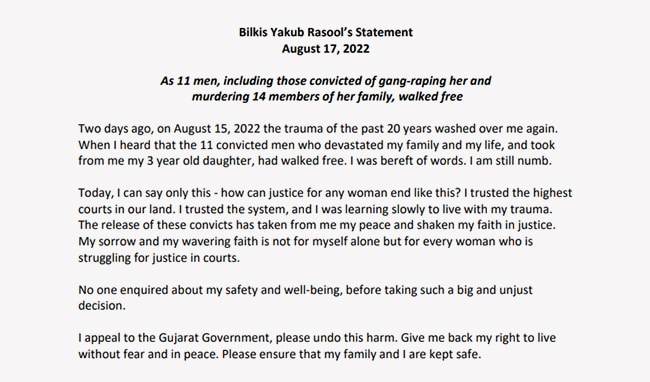