In Neck-Deep Water, Bihar Pregnant Woman Taken For Delivery On A Raft

Bihar floods: In neck-deep water, a pregnant woman had to be taken to the nearest healthcare facility on a raft in Darbhanga.

Bihar floods: Pregnant woman on a raft being taken to the healthcare centre in Darbhanga

A pregnant woman had to be taken to the nearest government health care facility, for delivery, on a makeshift raft in Bihar's flood-hit Darbhanga district today. Neighbours waded through neck-deep water and pushed the raft made of wooden planks and rubber tyres. The woman's mother, could be seen in the pictures, holding her daughter as the raft swayed while it was being pulled.

Soon after the news reached the Darbhanga magistrate's office, a State Disaster Relief Force (SDRF) boat was sent for the women and her family.

Darbhanga is one of the worst flood-affected districts of Bihar, which is witnessing extensive inundation this year and not even half the monsoon season is over. Most of the rivers in the region including the Baghmati, Mahananda and Khiroi are flowing above danger mark in Dhenga, Sitamarhi, Muzaffarpur, Hayaghat and Darbhanga districts, a water resources department bulletin said. 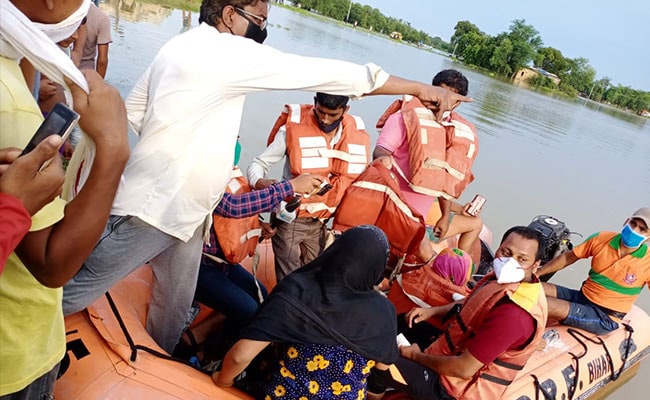 Bihar Chief Minister Nitish Kumar on Monday asked the disaster management department officials and district magistrates to be alert in view of heavy rainfall in catchment areas of the Gandak river, which has its source in Nepal.

The flood situation could worsen in West Champaran, East Champaran, Gopalganj, Muzaffarpur, Vaishali and Saran districts, if there is more rain in the catchment area of the Gandak, a government official said.

National and State Disaster Relief Force teams have been deployed in many districts to remove people to higher grounds. Officials however said that the embankments of the local rivers are safe.

Bihar and Assam are battling the twin disasters of floods and COVID-19, with the number of positive cases climbing every day.