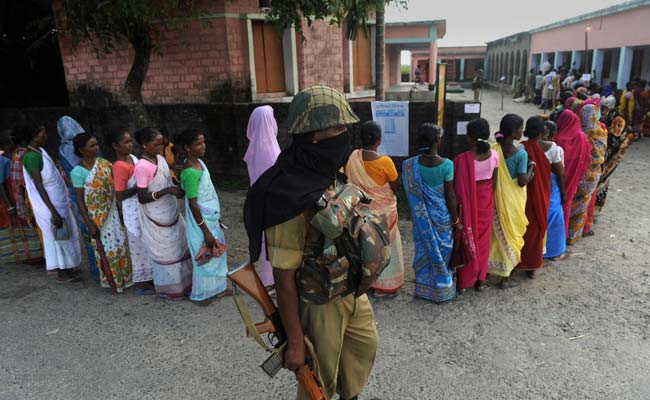 FILE: A paramilitary personnel stands guard as voters queue outside a polling station in Thakurganj village in Bihar in October 2010 (Agence France-Presse photo)

New Delhi: Assembly elections in Bihar, where the BJP is set for a battle against a united Janata Parivar, are likely to be held sometime in September-October, Chief Election Commissioner (CEC) Nasim Zaidi said, calling it the "mother of all elections".

Mr Zaidi also said that extensive central forces and a reworked expenditure monitoring system will be deployed to curb money and muscle power in the polls.

"Abuse of money is a big problem in Bihar. Therefore, this time we are going in for more systematic efforts. Certain legal amendments are yet to come from the Law Ministry. But within our powers, we have launched expenditure monitoring," the Chief Election Commissioner told PTI in an interview.

"...we will identify this time persons who serve as a channel for distributing bribe or for distribution of liquor, distribution of gifts. This assessment is still going on and we hope to come up with a re-strategised expenditure monitoring which we will roll out at an appropriate time," he said.

The electoral rolls will be ready on July 31, said Mr Zaidi, adding that the poll panel would take into account weather conditions, festivals, exams, holidays, and monsoons before arriving at the exact schedule. He also refused to go into the number of phases in which the assembly polls would be held.

The Election Commission has undertaken the mapping of all constituencies of Bihar into three categories, he said, adding that the panel plans to deploy central police forces "well in time" in areas where it finds maximum sensitivity.

The Commission would be using voter-verified paper audit trail (VVPAT) in 36 of the 243 assembly constituencies. The CEC said the number of such constituencies could increase.

VVPAT is a method of providing feedback to voters using a ballotless voting system. An electronic voting machine (EVM) will have a small attachment to it which, after pressing the button for a desired candidate, will print that name on a paper. It will be stored inside the machine and can be used in case of any controversy over the final result.

With several parts of the state being affected by the Naxal menace, Mr Zaidi he said an assessment of central paramilitary forces is also going on.

"Because this is a standalone election, I hope sufficient, adequate paramilitary forces will be made available. We will come out with a strategy on this," he said.

Promoted
Listen to the latest songs, only on JioSaavn.com
"The only thing I could say is that there would be a very, very effective use of CPMF (central paramilitary forces), because this is a standalone assembly election. There would be sufficient number of forces available," he added.

In the forthcoming elections, the ruling Janata Dal (United) and Lalu Prasad's RJD have decided to come together to take on the BJP which, along with its allies, had won 31 of the 40 seats in the state in the Lok Sabha polls last year.