Bihar Assembly Election 2020 Phase 3: Sharad Yadav's daughter Subhashini Yadav is contesting from the Bihariganj seat in Madhepura, where voting will take place on Saturday, in the last phase of the Bihar election. 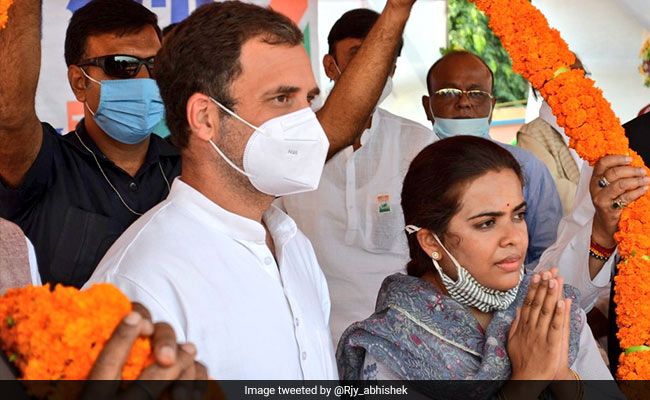 Subhashini Yadav, daughter of Sharad Yadav, is contesting from the Bihariganj seat in Bihar's Madhepura

Subhashini Yadav, a Congress debutant in the Bihar election, has the big task of protecting her father's legacy. Sharad Yadav, a veteran politician, won and lost many times from the Madhepura Lok Sabha constituency.

The 73-year-old is currently in a hospital in Delhi.

His daughter Subhashini is contesting from the Bihariganj seat in Madhepura, where voting will take place on Saturday, in the last phase of the Bihar election.

Election posters in the constituency introduce her as Subhashini Sharad Yadav.

Subhashini Yadav is from Madhya Pradesh, but she chose Madhepura for her first poll contest as a mark of respect to BP Mandal, the author of the Mandal Commission report, who was born here.

The Mandal Commission report, providing 27 per cent reservation in government jobs to Other Backward Castes, was implemented by the VP Singh government at the centre in which Sharad Yadav was a senior member. Mr Yadav along with Rashtriya Janata Dal president Lalu Yadav and Bihar Chief Minister Nitish Kumar had played an important role in the "Mandal movement" that led to the jobs quota in the 1990s.

"This has been my father Sharad Yadav's karmabhoomi and the kind of support and love that you have given him over the past 25-30 years, I too can feel the same here today," she said at a public rally at Bihariganj on Wednesday.

"I am your candidate, your daughter. I have come here to serve you, to fulfil the dreams of my father," she told the crowd.

Congress leader Rahul Gandhi, who was campaigning with her, praised Sharad Yadav and appealed to the crowds to vote for "his sister" Subhashini.

"I have not said this in any of my speeches in Bihar elections. I want a guarantee from you that you will make Sharad ji's daughter win the election. I am not asking for myself, but for you and Sharad Yadav ji, who is your leader, " Mr Gandhi said.

Subhashini Raj Rao, married into a Congress family of Haryana, joined the party just before the Bihar election.

Though the Madhepura assembly seat would have been the ideal launch pad for her, the Congress had to settle for Bihariganj as Madhepura went to the RJD's share.

Dinesh Chandra Yadav of the Janata Dal United had won from Madhepura in last year's Lok Sabha election, defeating Sharad Yadav, who had contested from the RJD of Lalu Yadav.

JDU chief and Chief Minister Nitish Kumar, while campaigning for his party candidate recently, refrained from speaking anything against Sharad Yadav, his former party colleague, and Subhashini.