The demand for special status comes just three days after the Bihar assembly passed a unanimous resolution urging the centre to make changes to the NPR and scrap plans for NRC. 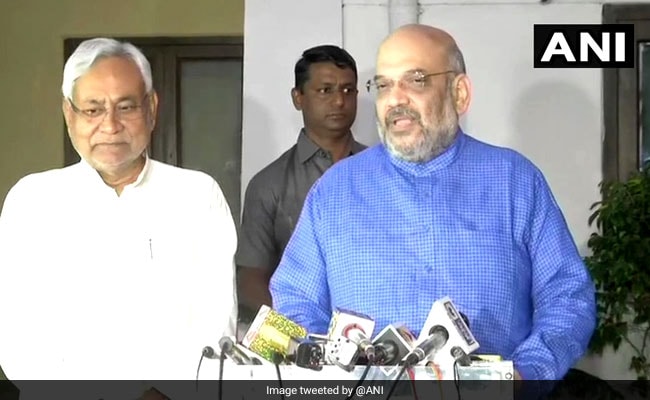 Bihar Chief Minister and BJP ally Nitish Kumar renewed his demand for special status for his state at an East Zonal Council meeting that was chaired by Union Home Minister Amit Shah on Friday in Bhubaneswar.

The chief minister said that despite double digit growth on important parameters of development like people below poverty line, per capital income, industrialization and social and physical infrastructure, Bihar is lagging behind the national average.

Nitish Kumar said that there are several states like Bihar and to bring them up to the national average, the time has come for positive policy intervention.

The Janata Dal United leader, who has been demanding special category status for Bihar since 2005 when he first came to power in the state, asserted that Bihar must be given "its due".

The Bihar chief minister also told the gathering chaired by Amit Shah that in the past he has kept the special status demand in front of the central government, but now he was placing it before them.

Nitish Kumar decided to be present for the East Zonal Council meeting, which was also attended by West Bengal Chief Minister Mamata Banerjee, despite the Bihar Assembly being in session.

The demand for special status comes just three days after the Bihar assembly passed a unanimous resolution urging the centre to make changes to the National Population Register (NPR) and scrap plans for a National Register for Citizens (NRC).

During a fiery debate on the controversial citizenship law CAA, NRC and NPR, Nitish Kumar had said his government had written to the centre asking for "additional clauses" in NPR forms to be dropped and the version used in 2010 to be restored. The new, changed version could be used as a basis to target people through the NRC, the Chief Minister had agreed.

Just a few days ago, Prashant Kishor, who had been expelled by Nitish Kumar from the JDU, had reeled off numbers that he claimed showed very little progress in the state between 2005 and 2020.

"Bihar has made progress in the last 15 years, but we must also see that compared to other states, Bihar falls short even today... Why is that? It stands where it was in 2005. Except Jharkhand, Bihar is still the most backward state in India. Bihar was the poorest state in 2005 and continues to be so. There is no one to question Nitish Kumar's governance model," said the former JDU vice president.