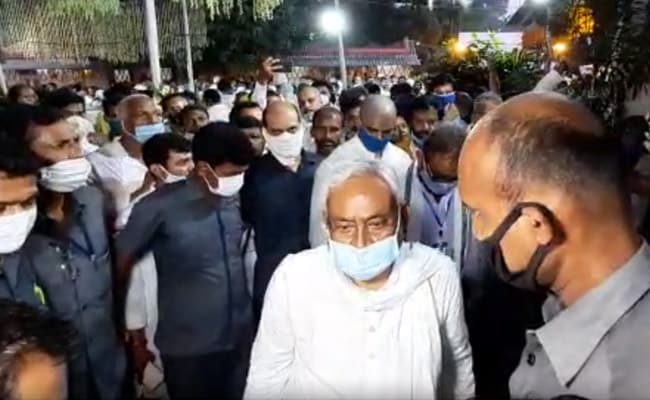 The ''Mahagathbandhan'' will get two-thirds majority in the Bihar polls, RJD leader Tejashwi Yadav was quoted as saying by news agency Press Trust of India. The RJD leader, who has promised 10 lakh government jobs if voted to power, also said he will bring a legislation in the first assembly session to nullify the "anti-farmer" laws brought by the Centre.

Chief Minister Nitish Kumar, the face of the ruling aliance with BJP, is up against the opposition ''Mahagathbandhan,'' comprising the Rashtriya Janata Dal (RJD), Congress and Left parties.

He is also facing challenge from former ally, the Lok Janshakti Party (LJP), whose chief, Chirag Paswan, who has made it clear that his sole agenda is to oust Nitish Kumar and form a government with the BJP.

Here are the Highlights on poll campaigning for Bihar Election:

Oct 27, 2020 23:28 (IST)
Bihar goes to polls for first phase tomorrow
Bihar will go for the first phase of assembly elections for 71 seats on Wednesday in a keen contest in which the RJD-led opposition alliance is making a determined bid to unseat the ruling NDA government led by Nitish Kumar.
The elections will be the first in the situation created by COVID-19 that has posed new challenges for the participants in the electoral process particularly political parties who could hold a lesser number of rallies and public gatherings.
Oct 27, 2020 18:38 (IST)
PM Modi, Rahul Gandhi to campaign in Bihar tomorrow
Prime Minister Narendra Modi will visit Bihar on Wednesday to campaign in the high-voltage state assembly polls and address three public meetings at Darbhanga, Muzaffarpur and Patna to garner support for the NDA nominees in constituencies that will go to the polls in the second phase on November 3.
Congress leader Rahul Gandhi will address rallies at Valmiki Nagar and
Kusheshwar Asthan in Darbhanga district tomorrow to canvass for the Grand Alliance.
The by-poll to Valmiki Nagar Lok Sabha seat will be held on November 3 along with the second round of voting in the state elections.
Oct 27, 2020 18:00 (IST)

Anurag Thakur's "Sholay" Swipe At Tejashwi Yadav
Union Minister Anurag Thakur borrowed from Gabbar Singh - the iconic villain from the 1975 blockbuster "Sholay" - on Tuesday to warn of a "return to a regime of terror and fear" if people voted for the opposition alliance.
Oct 27, 2020 17:03 (IST)

Election Commission of India has issued notice to BJP leader Imarti Devi for violation of model code of conduct. ECI asks her to respond to the notice in 48 hours.
(file pic) pic.twitter.com/EmhPPZyn5A

Oct 27, 2020 16:33 (IST)
Providing jobs a priority, says Tejashwi Yadav
Ten lakh jobs will be provided with the "first stroke of pen in first cabinet meeting", says RJD leader Tejashwi Yadav.
Confident of the "Mahagathbandhan" getting two-thirds majority in the Bihar polls, Tejashwi Yadav said providing jobs to unemployed youth would be top priority for him and his government will also bring a legislation in the first assembly session to nullify the "anti-farmer" laws brought by the Centre.
Mr Yadav said he is running an issue-based campaign in the assembly polls which was resonating with the masses and come November 10, the day of the counting of votes, "Bihar will witness a new dawn".
Oct 27, 2020 15:40 (IST)

Oct 27, 2020 15:25 (IST)
Tejashwi Yadav's 11 Questions For PM Modi Ahead Of His Rallies In Bihar
Tejashwi Yadav has posed 11 questions to Prime Minister Narendra Modi ahead of his visit to Bihar on October 28.
Prime Minister will hold rallies in Darbhanga, Muzaffarpur and Patna on Wednesday ahead of the Bihar Assembly polls.
In a press statement, Tejashwi Yadav stated, "Tomorrow Prime Minister Narendra Modi is coming to Bihar. I want to ask these questions from the double engine government of Delhi and Patna." (Read full story here)
Oct 27, 2020 15:04 (IST)
Even bad words used by Nitishji against me are like blessings to me: Tejashwi Yadav
"Even bad words used by Nitishji against me are like blessings to me. Nitish Kumar is mentally and physically tired and that is why he can speak whatever he likes. I treat his words like a blessing. This time Bihar has decided to vote on the issues of employment and development," Tejashwi Yadav had tweeted earlier
Oct 27, 2020 14:58 (IST)
Opposition's chief ministerial candidate Tejashwi Yadav's attack on Nitish Kumar over issues of "unemployment and corruption" and offer of "ummeed aur badlaav" (hope and change) seems to have struck a chord with a section of voters, opening up the electoral battle which many believed was done and dusted in the ruling alliance''s favour till a few months back.
Oct 27, 2020 13:37 (IST)

Watch | BJP Distancing Itself From #NitishKumar? Reading Between Lines In Bihar https://t.co/MqtqPnU6Cv#BiharElections2020pic.twitter.com/ikxekbD4EO

Bihar Assembly Election 2020 - PM Has 6 Siblings: Tejashwi Yadav On Nitish Kumar's "8-9 Children" Jibe
Bihar Chief Minister Nitish Kumar took no names in his taunt at an election rally about "having eight to nine children in the quest for a son" but his intended target, Rashtriya Janata Dal (RJD) leader Tejashwi Yadav, has responded sharply."
Oct 27, 2020 10:11 (IST)
Tejashwi Yadav, who is leading the opposition campaign and has repeatedly needled Nitish Kumar, 69, calling him "mentally and physically tired".
Oct 27, 2020 09:39 (IST)

On Monday, the LJP president target Mr Kumar again saying that Chief Minister Nitish Kumar will not return to power after November 10.

"Personally, I am PM Modi''s admirer but my political path is currently different. I am not using his name in my campaign. One thing is clear that the current CM won''t ever become Bihar CM again after 10th Nov. We will form a government with BJP, I have been saying this for long," Paswan told reporters here.

Oct 27, 2020 09:03 (IST)
Chief Minister Nitish Kumar, the face of the ruling aliance with BJP, is holding multiple rallies, including in his hometown Nalanada today. Mr Kumar, 69,  is up against the opposition ''Mahagathbandhan,'' comprising the Rashtriya Janata Dal (RJD), Congress and Left parties.