The person, who bears a striking resemblance to Ashneer Grover, is seen having a great time at the temple amidst other devotees. 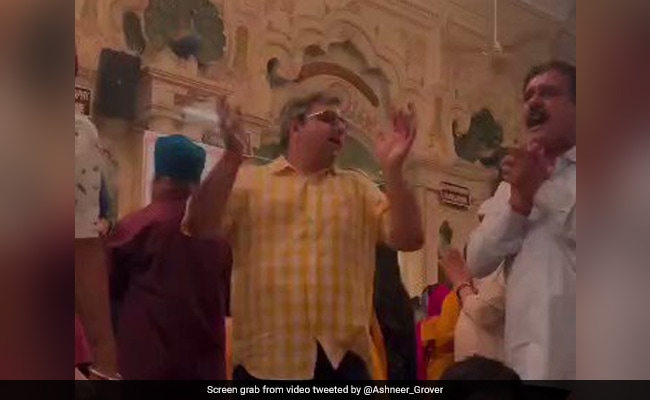 Ashneer Grover, the former BharatPe co-founder, has shared a video of his doppelganger on Twitter.

The clip shows a lookalike of Mr Grover performing kirtan at the Iskcon temple in Vrindavan. The person, who bears a striking resemblance to the entrepreneur, is seen having a great time at the temple amidst other devotees. Besides similar facial features, the man is also seen wearing spectacles like Mr Grover. “Found Ashneer Grover from Shark Tank doing kirtan at ISKCON Vrindavan,” the text on the video read.

Watching his lookalike making the most of the kirtan, Mr Grover seemed quite impressed. “Hey, doppelganger. Bhai itne maze se kirtan kar raha hai jitna maza mujhe dhandhe mein aata hai. Super fun. (The man is having as much fun doing kirtan as I do in my business)” Mr Grover said.

The clip amassed more than 1.45 lakh views on Twitter and prompted hilarious reactions.

A person highlighted how deeply devoted Mr Grover's lookalike appeared in the video. “Positivity literally coming out of the video,” the comment read.

He really seems to be immersed in bhakti ???? positivity literally coming out of the video!

This one had a request for the entrepreneur as he asked Mr Grover to follow his lookalike.

Every lines of yours takes me to Shark Tank episodes, tons of love to "dhandhe"????????

One was reminded of the Sony TV show Shark Tank India, which featured Mr Grover as one of the sharks.

Every lines of yours takes me to Shark Tank episodes, tons of love to "dhandhe"????????

This one suggested that it was Mr Grover in the video, but in the “parallel universe.”

Another could not get over the astonishing similarities between Mr Grover and his lookalike.

Can't believe this is not you! Barring that this guy seems to have few more inches

So, were you also amazed by the video?