Bharat Bandh: Ten central trade unions are participating in the nationwide Bharat Bandh today. They are protesting the new labour and farm laws of the central government 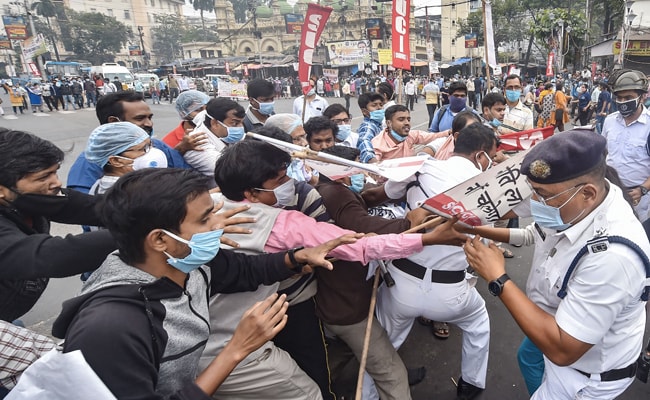 Protesting the government's new labour and farm laws, central trade unions are observing a nationwide Bharat Bandh today. While in Kerala, the bandh is near total, in West Bengal and Odisha protests have been seen. In few places in Kolkata, protesters have clashed with the police. Left-backed trade union members blocked railway tracks in some areas of Bengal. In parts of Odisha, rallies have been taken out by trade union members. There are no reports of banking services being affected. Protesting trade union members have started gathering at Delhi's Jantar Mantar. Trade Union leaders have said around 25 crores of workers in the country are part of the Bharat Bandh today.

Members of Odisha Nirmana Sramik Federation, All India Central Council of Trade Unions and All Orissa Petrol and Diesel Pump Workers' Union took out protest rallies. "The government has enacted laws which are against the labour and are supporting the employer. After these laws, most of the industries in India will not come under labour laws...We are demanding the withdrawal of labour code and repeal of three farm laws," Mahendra Parida, National Secretary, All India Council Of Central Trade Unions (AICCTU) told news agency ANI.

Kerala: Workers of Centre of Indian Trade Unions (CITU) form a human chain in Kochi as part of their nationwide strike today against Centre's new labour and farm laws. pic.twitter.com/g53db5Vmda

In Bengal, the trade union wing of the ruling Trinamool Congress, is not opposing the Bharat Bandh. In a note, the Bengal government however said it is against bandhs and all its offices will remain open today.