Bastille Day: Celebrations Scaled Down In France Amid COVID-19

Bastille Day: The French National Day, is celebrated every year on July 14. In 1789, a violent uprising helped usher in the French Revolution. 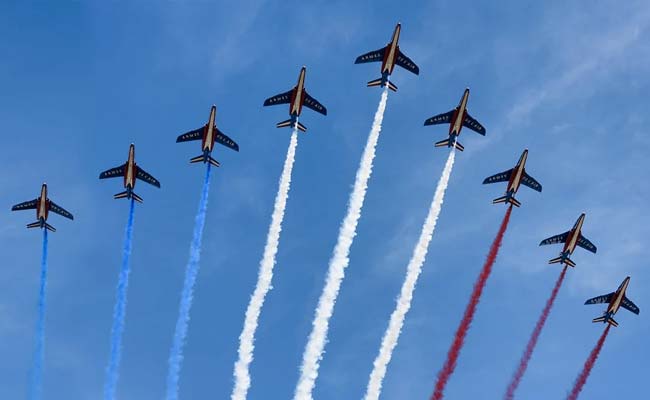 Bastille Day 2020: This year's flypastwill be dedicated to the COVID-19 health workers in France

Bastille Day celebrations this year in France has been scaled down due to the coronavirus pandemic. "This July 14, we will pay tribute to those who have put all their strength, all their skills, all their humanity against the virus," French President Emanuel Macron tweeted. For the first time since 1945, authorities have called off the annual military parade along the Champs-Elysees in Paris, according to news agency AFP. Only 2,000 soldiers - half the usual number - will gather at the Place de la Concorde.

People will not be allowed near the Concorde square to avoid the spread of the infection. The doctors in France have asked people not to let their guard down and use face masks.

The traditional flypast - with acrobatic jets, trailing blue, white and red smoke - by the country's air force will however take place. This year the flypast will be dedicated to the frontline coronavirus health workers.

Eiffel Tower will be closed to public for the Bastille Day fireworks in Paris. Reports say, most celebrations have been called off.

Bastille Day or the French National Day, is celebrated every year on July 14. In 1789, on this day, a violent uprising helped in usher the French Revolution. Citizens stormed of the Bastille fortress, which was used to lodge the state prisoners. French poet and philosopher, Voltaire was imprisoned in Bastille for nearly a year after he spoke out against the ruling French regent's family. Bastille had become the symbol of the harsh rule and tyranny of the French monarchy, especially King Louis XVI and his queen, Marie Antoinette.

"Liberty, Equality and Fraternity" became the war cry of the common people and it remained the country's official motto even to this day.

Known in France as 'La Fete Nationale' (the National Holiday) or 'Le 14 Juillet' (July 14), Bastille Day was made an official holiday in 1880. It became a worldwide celebration of all things French.