Bal Thackeray Never Stabbed Anyone In Back, Devendra Fadnavis To Shiv Sena

Devendra Fadnavis was speaking at a campaign rally for BJP candidate Rajnedra Gavit at Jawhar for the May 28 Lok Sabha by-election for Palghar seat. 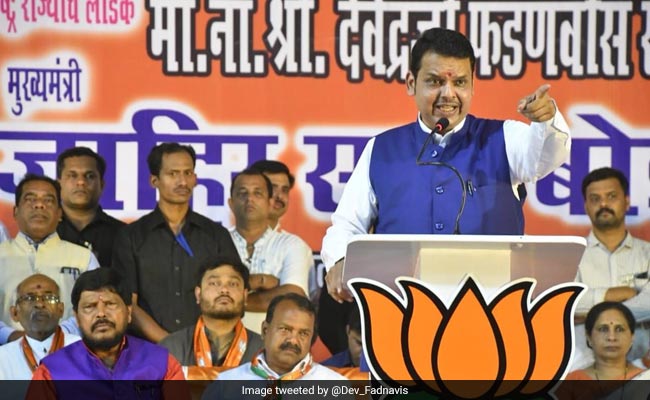 "Balasaheb Thackeray never stabbed anyone in the back. He faced attacks by staying in the front," Mr Fadnavis said in a veiled attack on the present Sena chief, Uddhav Thackeray.

He was speaking at a campaign rally for BJP candidate Rajnedra Gavit at Jawhar for the May 28 Lok Sabha by-election for Palghar seat.

The election was necessitated due to the death of BJP MP Chintaman Wanaga. The Sena gave ticket to his son, prompting the BJP to cry foul.

Mr Fadnavis had earlier said that Uddhav Thackeray knew it very well that the BJP was going to give ticket to someone from the late MP's family.

The Sena "broke up" the Wanaga family which has "lotus and the BJP" in their blood, the chief minister said today.

"No political capital should be made out of (bereaved family's) tears," he said.

"If you (Sena) wanted to wipe the family's tears, why did you wait till May 3 (when Shrinivas Wanaga joined the Shiv Sena)," Mr Fadnavis asked.

Promoted
Listen to the latest songs, only on JioSaavn.com
The BJP-led government in the state has succeeded in curbing malnutrition among tribal children, he claimed.