Bahubali Mahamastakabhisheka Mahotsav: Everything You Need To Know About The Jain Bathing Ritual

Mahamastakabhisheka Mahotsav: The 10-day festival will be celebrated at a large scale in Karnataka's Dharmasthala from February 9 for anointing ceremony of Lord Bahubali's statue. 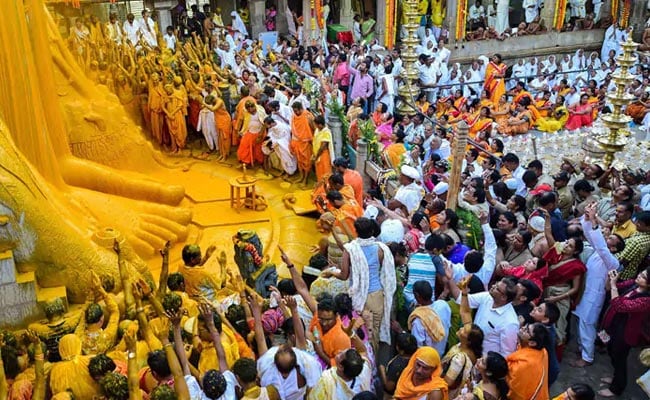 Mahamastakabhisheka Mahotsav 2019: Water, sandalwood paste is poured over the statue from a scaffolding.

The ceremony is performed in presence of Jain acharyas (ascetics).

An 'Agrodaka' procession will take place today from Shri Chandranathaswamy Basadi to Rathnagiri Betta on February 9. The actual anointment rituals with 1,008 kalash (urns) will be held for three-days starting from February 16.

Purified water and sandalwood paste is poured over the statue from a scaffolding. This event continues for weeks. As the Mahamastakabhisheka begins, consecrated water is sprinkled onto the participants by devotees carrying 1,008 specially prepared vessels. The statue is then bathed and anointed with milk, sugarcane juice, saffron paste, and sprinkled with powders of sandalwood, turmeric, and vermilion.