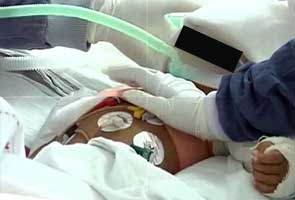 New Delhi: The baby who India saw in photographs, a black band placed across her eyes to protect her identity, has died in hospital. On Sunday, she would have completed two months at Delhi's AIIMS, where doctors treated her for unimaginable horrors inflicted upon her.

She died of a heart attack - her third in these two months. Lately, doctors had felt she was recovering from the different medical complications that were the result of having her face bitten, her head smashed into a wall, and her chest being burnt with a hot clothes iron.

Doctors attending to Falak say her heart rate had been fluctuating all day. They suspect her heart was weak due to the two cardiac arrests she had suffered from earlier. Doctors are shocked as Falak was off the ventilator and was recovering well.

She was brought to hospital on January 18 by a teen who said the infant had fallen down from her bed. The injuries were clearly caused by physical abuse. The teen girl was detained and put in a child welfare home where she was interrogated about how she had become the baby's custodian. Nurses looking after the baby, diagnosed with Battered Baby Syndrome, named her Falak meaning "the sky."

A shocked India began tracking Falak's updates via medical bulletins that doctors held everyday on camera. She remained in the Intensive Care Unit, often being put on a ventilator. She survived six brain surgeries. The last surgery performed on her was nearly three weeks ago. And a few days ago, doctors said she seemed strong enough to be able to go home.

But nobody came forward for her. A long police search had located her mother, named Munni, in Rajasthan. Her own story spoke of the plight of so many poor and illiterate women who are forced to give up their children because they can't afford to look after them. Falak had two siblings. Their father walked out on the family. Munni was lured to Delhi by a gang who trafficked sex workers. She refused to prostitute herself, so the women in the gang arranged a marriage for her to a man in Rajasthan. They brokered the deal, unknown to Munni, for two lakhs. They said she should leave her children behind, and that once she settled into her new life, her husband would be persuaded to accept them. The women then divided up the children. Falak's sister was sent home to Bihar. Her brother is five-years-old. And Falak was passed from one adult to another, all known to the gang of traffickers, till she ended up with a teen who was living with a married man. In frustration, the teen allegedly assaulted her. One day, when it was clear the baby was in critical condition, she brought her to AIIMS.

Promoted
Listen to the latest songs, only on JioSaavn.com
Falak's mother visited her once in hospital. She broke down after she saw her baby. She is now in a shelter at the Social Welfare Department's Nirmal Chaya Complex in Delhi.

The Child Welfare Committee was to decide whose custody Falak would be placed in once she left AIIMS. When doctors said she was strong enough to leave hospital, they said nobody has asked to look after her, so she was being kept in the general ward.