Attempts are being made to "emphasise that the Paris Agreement does not need to adhere to principles of the convention. I stated India's position that this should not be allowed. Historical contribution and responsibilities of developed nations cannot be overlooked", India said. 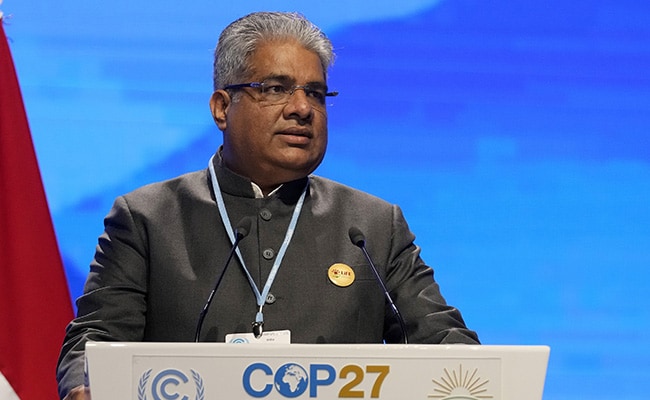 Rich nations are making a push to include language such as "major emitters" and "top emitters" in the cover text of the ongoing UN climate summit in Egypt which is not acceptable to India, a member of the Indian delegation said.

Developed countries want that all top emitters, particularly the top 20 including India and China, make intense emission cuts (to limit warming to 1.5 degree Celsius) and not just the rich nations which are historically responsible for climate change, the member told Press Trust of India on condition of anonymity.

The cover text is being debated and reworked as ministers and negotiators from all parties try to reach an agreement by the summit's scheduled close on Friday.

Providing details of the discussions in a blog post, Union Environment Minister Bhupender Yadav said the progress on key issues at the ongoing UN climate summit has not been good due to the "divergence of views on some fundamental approaches to climate issues".

He said there is a "distinct attempt to forget or overlook" the principles of equity and Common but Differentiated Responsibilities and Respective Capabilities (CBDR-RC).

Attempts are being made to "emphasise that the Paris Agreement does not need to adhere to principles of the convention. I stated India's position that this should not be allowed. Historical contribution and responsibilities of developed nations cannot be overlooked", he said.

Equity essentially means that each country's share of carbon dioxide emissions is equal to its share of the global population.

The CBDR-RC principle recognises that each country is responsible for addressing climate change but developed countries should bear primary responsibilities as they account for most of the historical and current greenhouse gas (GHG) emissions.

The Environment Minister said India cannot support creation of new categories, "such as major emitters, top emitters etc". and assignment of enhanced responsibilities based on such categories that have no basis in the convention and the Paris Agreement.

Reflection of gaps in the pre-2020 ambition in the cover decision is paramount as this has led to the unjust transfer of mitigation burden to developing countries in the post-2020 period, he said.

"Pursuing efforts to keep global temperature increase to 1.5 degrees will require significantly scaled up and accelerated mobilisation of climate finance from developed countries that have used up a disproportionate share of the global carbon budget," Mr Yadav added.

During the first week of the climate talks too, India, supported by other developing countries, had blocked an attempt by rich nations to focus on all top 20 emitters of carbon dioxide during discussions on the 'Mitigation Work Programme'.

He said no specific resources or sectors or gases can be singled out for action and added the European Union has supported India on this aspect.

India had proposed on Saturday that the talks wrap up with a decision to "phase down" all fossil fuels and not just coal.

EU Vice President Frans Timmermans told the media on Tuesday that the bloc would support India's proposal of phase down of all fossil fuels "if it comes on top of what we already agreed in Glasgow".

He added that "it should not divert attention to our efforts to phase down coal as we had agreed last year".

Mr Yadav said a strong language regarding technology transfer and support is needed in the cover text.

"Green premiums for several new technologies remain high and we need the cover decision to recognise the means of implementation support gaps covering technology as well as finance," the Environment Minister said.

Failure in means of implementation (finance, technology, capacity building) support to developing countries is a systemic failure under the Paris Agreement that continues to be a barrier to the implementation and further ambition, he said.

Climate finance for adaptation, mitigation and addressing loss and damage is a key issue at the climate summit this year.

Rich countries have repeatedly failed to mobilise USD 100 billion every year, a promise they made in 2009, to help developing countries cope with climate change.

Developing countries, including India, are also pushing developed countries to agree to a new global climate finance target -- also known as the new collective quantified goal on climate finance (NCQG) -- which they say should be in trillions as the costs of addressing and adapting to climate change have grown.

India has also sought clarity on the definition of climate finance -- the absence of which, experts say, allows developed countries to greenwash their finances and pass off loans as climate-related aid.