Attacked in Bangalore, physically and with racial abuse 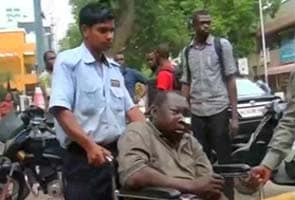 Bangalore: An attack on an African national in India's IT capital Bangalore has highlighted possible race discrimination in one of India's most cosmopolitan cities.

Wandoh Timothy,  who has been working in India for over 10 years now, was brutally beaten and subjected to a racist slur last week, all because he asked two men on a motorbike to drive properly.

The 44-year-old was on his way to pick up his daughter from school, on July 9, when the incident took place.

The two men on the bike blocked his route and began to beat him viciously. He told NDTV he tried to leave the spot, just get away, but was not allowed to. And adding further hurt to the physical assault was the verbal abuse which included racial slurs.

He says another 10 men joined the original two to take part in the beating. He was hit on his back with a huge stone - and the attackers left him bleeding on the road.

Speaking to NDTV at his home in Kalyananagar, Wandoh said he managed to snatch the identity cards of the first two attackers - and based on that, the city police made two arrests.

Wandoh, originally from Chad in Africa, is married to an Indian woman, Beaula, and they have two young daughters. With a Person of Indian Origin (PIO) card to his name, he considers India his second home.

Promoted
Listen to the latest songs, only on JioSaavn.com
Wandoh's wife, Beaula, told NDTV she was frightened to see her husband in that condition and ashamed as an Indian at an assault like this.

Unfortunately, this may not be the first time. An estimated 10,000 African students are in Bangalore - - and students we spoke to said discrimination and racial abuse was something they had all faced. The students plan to hold a protest rally in the city on Friday.
Comments
Race discriminationracist attackAfrican nationalBangalore