A portion of his ashes was brought this morning to Lucknow, the Bharatiya Janata Party leader's political karmabhoomi from where he won five successive elections to the Lok Sabha. 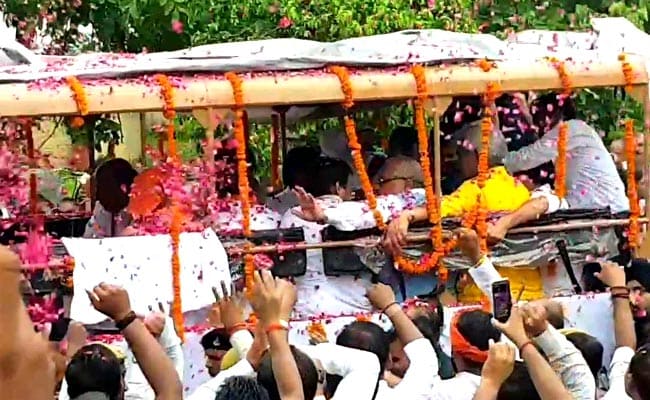 Ashes of former Prime Minister Atal Bihari Vajpayee were immersed in the Gomti river, among the several rivers across the country where such rituals took place on Thursday.

A portion of his ashes was brought in the morning to Lucknow, the Bharatiya Janata Party leader's political karmabhoomi from where he won five successive elections to the Lok Sabha.

Cutting across party lines, political leaders turned up at a meeting at Jhulelal Vatika to pay homage to Mr Vajpayee who died on August 16.

Leaders from Congress, Samajwadi Party and BJP's alliance partners Suheldev Bharatiya Samaj Party and Apna Dal (Sonelal) were among those who attended.

The gathering, which included Mr Vajpayee's family members observed two minutes of silence in memory of the leader.

He said after becoming prime minister, Mr Vajpayee made India hold its head high in the international arena.

"Similar is the case with mobile phones and the telecommunication revolution. After Independence, the development of roads and the Golden Quadrilateral project remind us of Atalji," he said at the gathering.

At the airport, Yogi Adityanath and deputy chief ministers Keshav Prasad Maurya and Dinesh Sharma were present to receive the ashes.

A guard of honour was also presented at the airport to honour Mr Vajpayee.

A special vehicle carrying the ashes then travelled to Jhulelal Vatika on the banks of river Gomti, after passing through several parts of the city.

The strong bond the former prime minister shared with the people of Lucknow was on display as they braved the rain and gathered at places along the route to bid farewell.

UP Governor Ram Naik was present at the event. Senior Congress leader Pramod Tiwari and Samajwadi Party leader Shivpal Yadav were at the meeting.