Elections in Rajasthan and Telangana will be held on December 7 and the counting on December 11. 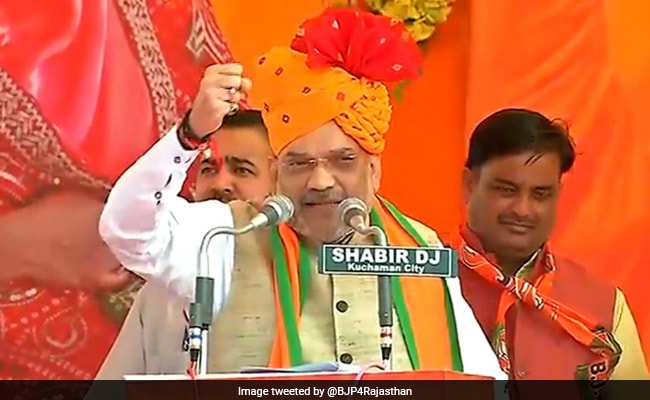 Ahead of the upcoming assembly elections in Rajasthan and Telangana, Bharatiya Janata Party (BJP) and the Congress intensified their campaigning in both the states.

On Thursday, the Congress party released its manifesto for the assembly election, which included the promise of farm loan waivers, and unemployment allowances among other things. This came a day after the BJP released it manifesto and claimed that it had fulfilled 95 per cent of the promises made in 2013.

Elections in Rajasthan and Telangana will be held on December 7 and the counting on December 11.

Here are the LIVE updates from Assembly Election Campaigning:

Nov 30, 2018 15:52 (IST)
Navjot Singh Sidhu to be part of the Musheerdabad assembly roadshow and Rajendranagar Sikh Chavani program in Telangana
Nov 30, 2018 15:03 (IST)
The Bharatiya Janata Party workers are working on 70% of the country's terrain to serve the public through government, says BJP chief Amit Shah.
Nov 30, 2018 14:21 (IST)
BJP chief Amit Shah to shortly address a public meeting in Churu, Rajasthan.
Nov 30, 2018 13:33 (IST)
When the Congress government was in power at the Centre, Rajasthan was given Rs 1 lakh crore. "When Narendra Modi became prime minister, he gave Rs 2, 63, 000 crore to Rajasthan," says BJP chief Amit Shah.
"He (Rahul Gandhi) asks why did Nirav Modi and (Vijay) Mallya run away? These loans were lent during your tenure. They didn't run away during Congress government as they had a partnership. But when PM Modi's government came, they were afraid of being put behind bars," he adds.
Nov 30, 2018 13:27 (IST)
"Today the front page of Indian Express says that a company got a loan of thousands of crores and its commission reached Nehru family's son-in-law with which he bought 150 hectares of land. I want to ask Rahul Gandhi if he can answer now," Amit Shah asks.
Nov 30, 2018 13:26 (IST)
There is no internal democracy in Congress, the BJP chief says in Nagaur.
"It has become Gandhi-Nehru family's private firm. These people (Congress) feel ashamed saying "Bharat Mata Ki Jai" but feel proud of Sonia (Gandhi) mother," he says.
Nov 30, 2018 13:21 (IST)
"I know Nagaur will set the foundation stone for BJP's government formation in Rajasthan," says Bharatiya Janata Party (BJP) Amit Shah.
"Rahul Baba you should not dream during day-time. Pick up and check the electoral history of this country since the time Narendra Modi took over as Prime Minister, and you will know what the outcome of Rajasthan will be," he adds.
Nov 30, 2018 13:17 (IST)
Bharatiya Janata Party president Amit Shah reaches Karwasra, Nagaur, in Rajasthan, addresses public meeting.